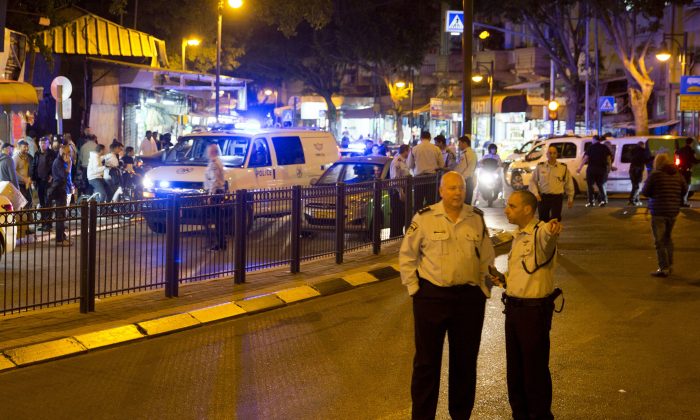 Spokesman Micky Rosenfeld said police confirmed it was a “terror attack” and that the 18-year-old Palestinian from the West Bank was arrested soon after the shooting in Petah Tikva.

Israeli media reported that the Palestinian attacker fired at a bus and toward shoppers buying groceries at the market ahead of the Jewish Sabbath, before running down the street. He continued shooting as civilians gave chase.

The Ynet news site said he fled into a repair shop for sewing machines, where passers-by tackled him. They threw a sewing machine and chairs at the attacker and subdued him before police detained him. The site published a photo of a blood- stained sewing machine from the scene.

The Palestinian stabbed an Israeli in the neck with a screwdriver in the struggle.

Israel’s ambulance service said a man and a woman in their 50s and a woman in her 30s were treated for bullet wounds to their lower bodies. A 40-year-old man was stabbed in his upper body, it said.

Haley Supports Moving US Embassy in Israel to Jerusalem

Since 2015, Palestinian attackers have carried out numerous stabbings, shootings and assaults using cars, killing 41 Israelis and two visiting Americans. During the same period, Israeli forces have killed 235 Palestinians. Israel says most of the Palestinians killed were attackers while others died in clashes with Israeli forces.

Israel says the bloodshed is fueled by a Palestinian campaign of incitement, compounded by social media sites glorifying attackers and encouraging violence. Palestinians say it stems from frustration over decades of Israeli rule in territory they claim for a state.

“An eighteen-year-old Palestinian filled with hatred attacked innocent Israelis today,” Danon said in a statement. “This terror attack is a direct result of ongoing incitement from the Palestinian leadership. The international community must take immediate and decisive action against this incitement before it leads to any further bloodshed.”

Earlier on Thursday, an explosion killed two Palestinians along the Gaza border with Egypt in what appeared to be a strike on cross-border smuggling tunnels.

Palestinian officials said the blast was caused by an Israeli airstrike, but the Israeli military denied any involvement. Residents said the explosion was on the Egyptian side of the border, raising the possibility of an Egyptian strike.

Mohammed Zorob, who lives in the border town of Rafah, said the blast took place on the Egyptian side.

Hamas has been working to improve relations with Cairo in recent months, and recently announced the deployment of additional forces along the border. The Islamic militant group ruling Gaza says the border is more secure and that underground smuggling has ceased.

The Israeli military, which has not struck the Gaza tunnels since the 2014 war, denied it was involved in the blast.

On Wednesday, the military said its missile defense system intercepted several rockets fired by militants in Egypt toward the southern Israeli city of Eilat—a relatively rare occurrence. ISIS terrorist in the Sinai Peninsula claimed responsibility for the rocket attack.

Earlier this week, Israel carried out several strikes on Hamas targets after a rocket landed in Israel. Israel holds Hamas responsible for any fire originating from Gaza.