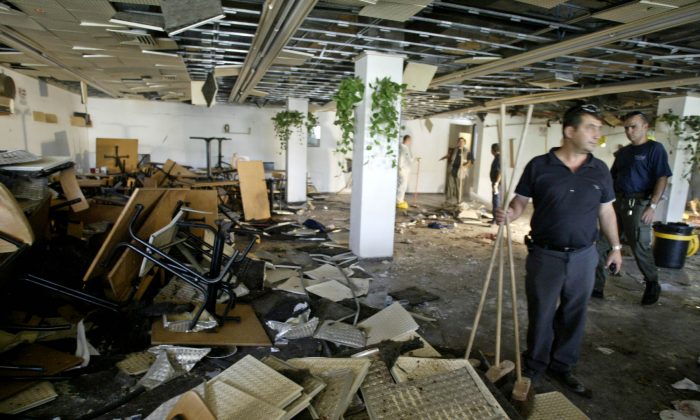 In this July 31, 2002, file photo, workers clean the inside of a cafeteria hours after a bomb exploded at Hebrew University in Jerusalem, killing nine, four of them Americans, and wounding more than 70. Terrorism victims are suing the Palestinian Liberation Organization and the Palestinian Authority in New York for damages under the Anti-Terrorism Act, which allows victims of terrorism to seek compensation through the U.S. Federal Court System. (AP Photo/David Guttenfelder, File)
US

The decision in a landmark case in New York on Monday found the Palestinian Authority liable for terror attacks, awarding $655 million in damages to victims from 10 American families.

The lawsuit was filed under the Anti-Terrorism Act, which allows those victimized by U.S.-designated terrorist organizations to file suit and pursue their civil actions even if the case happened outside of the United States.

The case, Sokolow v. PLO, was filed seeking $1 billion in compensation for a number of deadly attacks in or near Jerusalem during the second Palestinian intifada (uprising) 10 years ago. The attacks, which ranged from bus bombings to shootings to suicide attacks in cafes, ultimately killed 33 people and wounded hundreds.

Some of the victims were American citizens, allowing them to file the suit against the Palestinian Authority, the entity responsible for administering and governing parts of the West Bank.

The Palestinian Authority has long struggled financially and the payout in the verdict is about $200 million more than the amount of aid it receives from the U.S. government alone every year.

In fact, numerous foreign governments give the Palestinian Authority financial assistance. The United States alone gives $440 million a year in grants, cash, and narcotics control, according to the Congressional Research Service.

The verdict comes at a tricky time for the Palestinian government, which is in the process of preparing to file a suit for war crimes against the Israeli government at the International Criminal Court in The Hague. The Palestinian Authority has not commented on the lawsuit directly, but in recent weeks unnamed sources did say that it was worried about the outcome.

Nitsana Darshan-Leitner, a lawyer representing the victims’ families and founder and director of the Israel Law Center, said last week before the verdict that the case “will definitely have an impact” on the Palestinians’ image. Darshan-Leitner’s organization litigates against terrorist organizations and banks that support terrorism.

She also said that the case is “full of evidence” that Palestinian Authority security men helped plan or carry out the attacks.

“Those involved in the attacks still receive salaries from the Palestinian Authority and still get promoted in rank while in jail,” she said, adding that families of suicide bombers receive monthly salaries from a Palestinian “martyr’s foundation.”

According to Darshan-Leitner, the defendants have “boasted” that they will appeal the decision and that the families will never collect on the judgment.

“We will not allow them to make a mockery of the U.S. court process, however, and we will continue to pursue them until it is paid in full,” she said. “If the PA hand PLO have the funds to pay the families of the suicide bombers each month, then they have the money to pay these victims of Palestinian terrorism.”

Defense attorney Mark Rochon had told jurors in closing arguments last week that the Palestinian Authority and the Palestine Liberation Organization were not privy to the attacks.

Rochon argued that an entire organization cannot be held liable for the actions of the suicide bombers and gunmen, whom he said acted on their own.