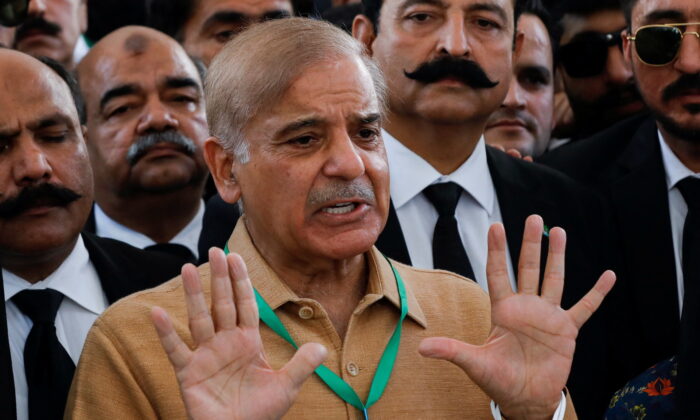 Pakistani Prime Minister Shehbaz Sherif, then-leader of the opposition, gestures as he speaks to the media at the Supreme Court of Pakistan in Islamabad on April 7, 2022. (Akhtar Soomro/Reuters)
Asia & Pacific

Pakistan’s foreign debt has reached a level that even the future generations will not be able to pay off, Prime Minister Shehbaz Sharif said on May 28.

“Imran Khan’s government took such hefty amount of loans that our generations might not be able to pay them,” Sharif said in a public address, referring to his predecessor, Pakistan-based The News reported.

Sharif said the move was necessary to safeguard the nation’s economy, and because the previous administration had “emptied” the national exchequer.

“But we have, to cushion the inflation’s effect on people, have announced a subsidy package,” Sharif said as he pledged to “fight till the end for people’s prosperity.”

Imran Khan was ousted in April 2022 after losing a vote of confidence in parliament. He had called for fresh elections and rallied thousands of his supporters to Islamabad, resulting in clashes with police in some areas.

Khan also accused the United States of plotting “a foreign conspiracy” to topple his government after his two-day visit to Russia in late February, which coincided with Moscow’s invasion of Ukraine. Washington has denied the allegations.

Finance Minister Miftah Ismail said on May 29 that Pakistan needs $36 billion to $37 billion in the next fiscal year and must pay about $21 billion in foreign debt due in 2023. The government also needs an additional $10 billion to $15 billion to cover the current account deficit.

Pakistan has requested the International Monetary Fund (IMF) revive the $6 billion bailout package, and both sides are expected to reach an agreement in June, according to local reports.

“To take loans from the multilateral institutions, it is a must to be in the IMF program. This unlocks financing from the World Bank, Asian Development Bank … and particularly the Chinese-led Asian Infrastructure Investment Bank,” Miftah said.

Foreign reserves held by the State Bank of Pakistan fell by $75 million to $10.1 billion in May, which the bank attributed to to external debt repayments. Pakistan owes China approximately $18.4 billion, or one-fifth of its external debt, and China agreed in March to rollover $4.2 billion in debt.

Pakistan’s Foreign Minister Bilawal Bhutto-Zardari met with U.S. Secretary of State Antony Blinken in New York on May 17 and expressed Pakistan’s intention to increase engagement with the United States.

China invested over $65 billion in infrastructure under the China–Pakistan Economic Corridor (CPEC), which is part of Beijing’s Belt and Road Initiative (BRI). Other countries, including the United States, have criticized the BRI infrastructure program as a “debt trap” for smaller nations.

Balochistan is home to a deep-water port in Gwadar city, which Beijing is developing under CPEC. Baloch separatist guerillas claimed they have been fighting for decades for a greater share in regional mine and mineral resources.

Massive protests erupted in November 2021 against CPEC as locals opposed the government granting licenses for Chinese trawlers to fish near Gwadar.

They also protested against the severe shortage of drinking water and electricity, restrictions on movement, and limited sea access resulting from the high level of security for CPEC that runs through the province. The protests eased after the government agreed to most of their demands in December.