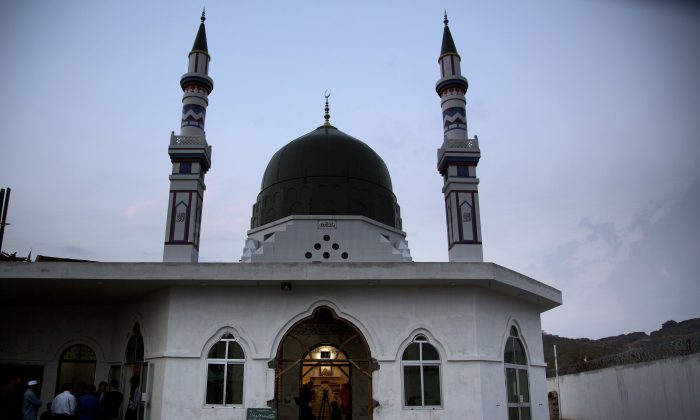 People visit the shrine of Mumtaz Qadri, who was hanged for gunning down a politician who criticized Pakistan's controversial blasphemy law and defended a Christian woman, in Barakhao, Pakistan. (AP Photo/B.K. Bangash)
International

BARAKHAO, Pakistan—Two ornate minarets pierce the evening sky. They frame the emerald green colored dome of an ornate shrine erected to honor Mumtaz Qadri, an assassin hanged for gunning down a politician who criticized Pakistan’s controversial blasphemy law and defended a Christian woman sentenced to death for allegedly insulting Islam.

Qadri’s body lies in a marble-encased tomb inside the shrine. He had been a member of an elite police unit charged with protecting Punjab provincial governor Salman Taseer. Instead, he turned his AK-47 assault rifle on the politician killing him in a hail of bullets. With an eerie smile on his face he then laid down his weapon and was arrested, tried and later hanged.

The shrine, which is being built on the outskirts of the federal capital, is worrisome for those in Pakistan who fear a growing tide of extremism in the country marked by brutal sectarian killings, violent protests by clerics in favor of the blasphemy law, and frightening threats to anyone who would dare to challenge it.

Five bloggers critical of hardline Islam who disappeared earlier this month, and the Pakistanis who are protesting their disappearance, have become the latest target of radical clerics and their followers. The clerics have accused the missing writers of blasphemy after a social media campaign linked them to allegations of blasphemy without any evidence. A simple accusation of blasphemy in Pakistan can be tantamount to a death sentence.

The government has tried to quell the allegations, saying there is no evidence that the bloggers said or did anything that could be considered blasphemous and no suggestion of any of them being charged with blasphemy once they are found.

The bloggers, whose disappearances have been decried nationally and internationally, have been critical of the military and have bemoaned the presence of radical religious militant groups in their country. No one has taken responsibility for their disappearances.

Supporters of the bloggers say that Qadri’s shrine exalts those who kill in the name of religion and makes even amending the blasphemy law to make it more difficult to abuse, a dangerous proposition.

“This is very, very unfortunate . . . that a person who has been adjudged by the highest constitutional court of Pakistan, the Supreme Court of Pakistan, as a terrorist (yet) these clerics and the innocent people of this country, they’re trying to paint him as a saint,”” said attorney Saif-ul-Mulk. “I can assure you that in the coming 10 to 20 years, he will be a saint of very high profile and billions of rupees will be coming to his shrine.”

Mulk is defending Asiya Bibi, the Christian woman who has been on death row for the last six years, and has launched a final appeal on her behalf in the Supreme Court. Bibi was charged with blasphemy after a group of women with whom she worked in the field berated her for drinking the same water as them. They argued and the women accused Bibi of insulting Islam’s prophet, a charge she flatly denies.

Mulk also prosecuted Qadri, securing a guilty verdict and death sentence that was carried out last year. He travels with security and police are stationed outside his home in the eastern Punjab city of Lahore.

In an interview, Mulk also warned that the financial windfall that has come with Qadri’s death risks encouraging would-be “martyrs.”

“If one person is not able to feed his parents and family, he gives his life, kills somebody big and the whole family becomes richer than they could ever dream,” he said.

For some in Pakistan, the shrine is seen as yet another tool in the arsenal of radical Sunni Muslim groups seeking to consolidate their hold over Pakistan’s 180 million people.

Ayesha Siddiqa, a defense analyst who has written extensively on Pakistan’s military complex, warned in a recent column that Qadri’s shrine will emerge as a rallying cry for the preservation of the blasphemy law, which some moderate lawmakers would like to see at least amended to make it more difficult to abuse.

“The blasphemy law is their big ticket to support amongst the masses which they would like to consolidate further with the symbol they have now erected in the form of Mumtaz Qadri’s shrine near the capital city,” Siddiqa wrote. “Last year, his family had buried him strategically in an open ground and sort of wilderness (area) to ensure that a structure could be built on top.”

Qadri’s brother, Amir Sajjad, speaking at the shrine where he spends every afternoon and evening collecting donations, said the shrine was his brother’s final wish. Sajjad said Qadri told his family he wanted a shrine built at his grave as well as a mosque and a madrassah, or religious school.

Construction has already begun on the mosque and preparations are under way for the school. Millions of rupees in donations have been collected, said Sajjad.

The roof of the shrine shimmers from the thousands of tiny mirrors inlaid throughout. A crystal chandelier revolves atop Qadri’s ornate marble grave embellished with verses from The Quran.

Despite the construction, adherents lay their prayer mats and offer prayer. Those coming to pay homage to Qadri are a mix of men, women enveloped in large shawls, children and a handful of young students from Pakistan’s financial hub Karachi, a cosmopolitan city of 20 million people on the Arabian Sea.

They are educated and speak English but their views are hardline.

Bilal Fazl, 18, who attends university in Karachi, was filled with admiration for Qadri.

“He said the blasphemy law was a black law. It was OK to kill him,” he said of Taseer.