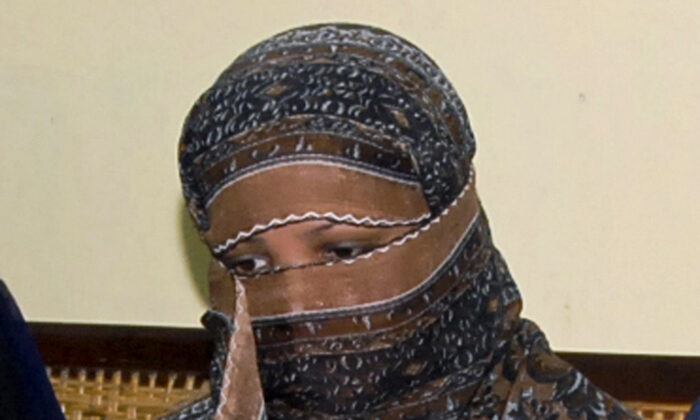 Asia Bibi, a Pakistani Christian woman, listens to officials at a prison in Sheikhupura near Lahore, Pakistan, on Nov. 20, 2010. (AP Photo/File)
International

A Christian woman acquitted of blasphemy after spending eight years on death row in Pakistan, and who faced death threats from Islamic extremists, said she is going to request asylum in France.

Asia Bibi will receive her diploma on Feb. 25 as a Citizen of Honor of the city of Paris, a title she was awarded in 2015. She will meet French President Emmanuel Macron on Friday, officials said.

Bibi has lived in Canada since she was released by Pakistan last year. She expressed her desire to live in France in an interview on French radio RTL on Monday.

Macron’s office said French authorities are “ready to welcome Asia Bibi and her family in France if this is what they wish to do.”

Bibi was convicted of blasphemy in 2009 after a quarrel with two fellow farm workers, who refused to drink from the same water container as a Christian. Five days later, the women said Bibi had insulted Islam, a crime punishable by death. Bibi was charged with blasphemy despite repeatedly denying the accusation. The Supreme Court overturned her conviction last year, and she had been in protective custody since then.

Islamic extremists have rioted over the case and threatened to kill Bibi.

The case has brought international attention to Pakistan’s controversial blasphemy law, which carries an automatic death penalty. The mere suspicion of blasphemy against Islam is enough to ignite mob lynchings in the country. Blasphemy allegations have also been used to intimidate religious minorities and to settle scores.