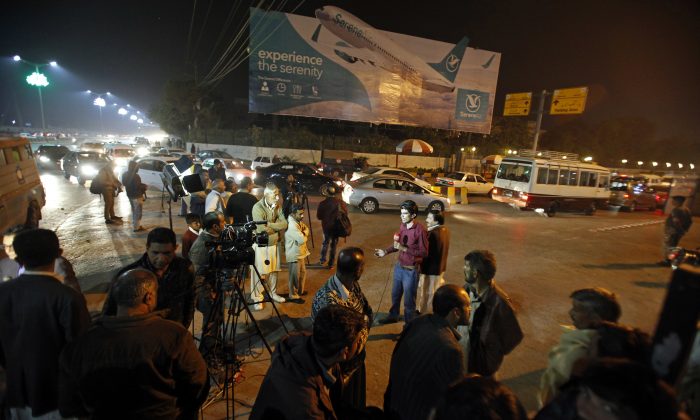 Pakistani media and residents gather at Benazir Bhutto International Airport following a report that a passenger plane from Chitral, in the country's north, had crashed near a village near the town of Havelian, in Islamabad, Pakistan on Dec. 7, 2016. Pakistan International Airlines said that the ATR-42 aircraft carrying around 40 passengers and crew lost touch with the control tower and that all resources are being mobilized. (AP Photo/Anjum Naveed)
International

ISLAMABAD—A plane belonging to Pakistan’s national carrier crashed on Wednesday with about 40 passengers and seven crew members on board, police and an airline spokesman said.

According to senior police officer Khurram Rasheed, the plane crashed in a village near the town of Havelian, located about 75 kilometers (45 miles) northwest of the capital, Islamabad. The small twin-propeller aircraft was travelling from the city of Chitral to Islamabad when it crashed shortly after takeoff.

The cause of the crash was not immediately clear. Pervez George, the spokesman for Civil Aviation Authority, told The Associated Press that a total of 47 people, including crew members, were on board and, “I don’t think there is any chance of finding any survivor.”

TV footage showed debris from the plane and a massive fire at the site of the crash.

Police said rescuers had retrieved at least seven bodies from the debris and efforts were underway to collect the remains of other passengers. There was no official confirmation about casualties, but Pakistan’s Interior Ministry dispatched a team to help identify the bodies through DNA tests.

Authorities have released names of 40 passengers—among them Junaid Jamshed, a famous singer-turned-Islamic-preacher.

According to Daniyal Gilani, the spokesman for Pakistan International Airlines, the plane had lost touch with the control tower prior to the crash. The army said it had dispatched troops and helicopters to the location.