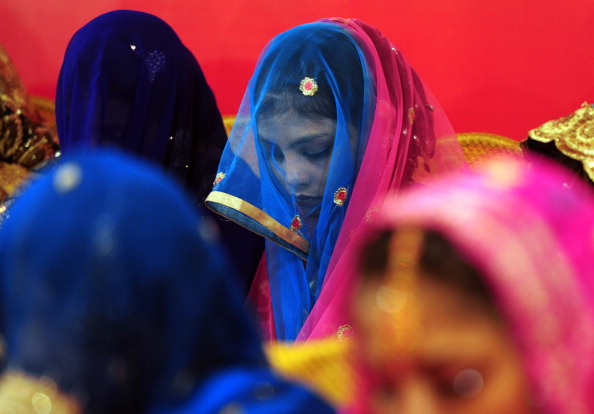 Pakistani brides attend a mass-wedding ceremony in Karachi. Forced marriages are still common in the some regions of the country (Asif Hassan/AFP/Getty Images)
Asia & Pacific

A recently-wedded woman in a village in the eastern Punjab region of Pakistan tried to poison her husband, only to accidentally kill 17 members of her extended family.

Aasia Bibi, 21, was angry after having been married against her will to a relative in September.

Her parents did not heed her repeated warnings that she would go to any lengths to end the marriage.

According to the local police chief, Bibi mixed poison into her husband’s milk. He refused to drink it, however, and the poisoned milk was used by the mother-in-law to make a Lassi—a traditional yogurt-based drink—which she served to the whole family.

Twenty-seven family members living in the area fell unconscious and were hospitalized, 17 of whom have now died, according to the Associated Press.

Bibi’s parents had forced her to marry, she told reporters when she appeared before a judge in in the city of Muzaffargarh on Tuesday, according to AP.

“I repeatedly asked my parents not to marry me against my will … but my parents rejected all of my pleas and they married me to a relative,” she said.

Bibi said she had repeatedly asked for her parents to allow her divorce, warning them that she would go to any lengths to get out of the marriage.

Bibi said that she obtained the poison from her boyfriend, Shahid Lashari. According to police, he has confessed to supplying the poison.

Aasia denies the allegation and says the other man told her to poison the lassi but she didn’t & he asked her to marry him but she refused pic.twitter.com/WXsATbLVPw

Local police chief Sohail Habib Tajak said that a district judge had given police 2 weeks to question Bibi, to try to establish whether she had acted of her own accord, or whether she had been incited by her boyfriend.

“This incident took place last week and our officers have made progress by arresting a woman and her lover in connection with this murder case, which was complicated and challenging for us,” Tajak told AP.

The other 10 poisoned family members—from the village of Ali Pur, 60 miles south of Multan—remain in the hospital.

Arranged marriages of daughters is common in the Punjab region of Pakistan.

The AP report did not specify the date of the alleged crime, which was first reported on Oct. 28th in the Pakistan Express.