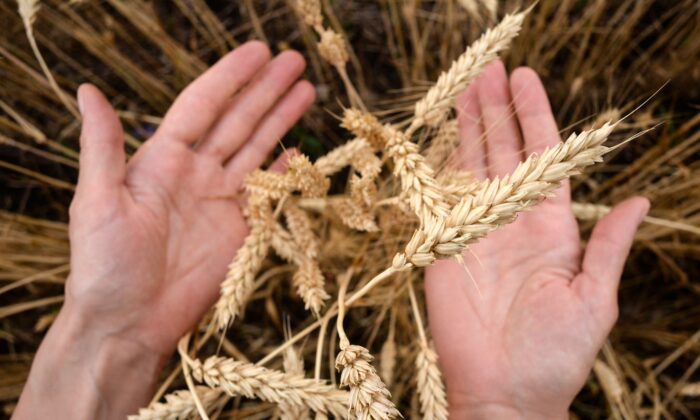 A wheat field is pictured outside the Russian village of Maslovsky, about 19 miles from the city of Voronezh, on July 9, 2020. (Kirill Kudryavtsev/Getty Images)
International

Pakistan will import 2 million metric tons of wheat from Russia with cash payment amid Western sanctions imposed on Russia after its invasion of Ukraine, according to local reports on May 28.

The ECC also permitted the importing of another 1 million metric tons of wheat through an international tendering process under the existing arrangement. Customs duties on edible oil imports will be temporarily waived to expedite shipments in June.

The ministry said that Pakistan must figure out a way to make payments for Russian imports, given that Russian banks have been blocked from the SWIFT international payment network. The National Food Security Ministry had suggested exploring barter trade with Russia.

Pakistan has shifted from being a wheat exporter to a wheat importer. The ministry stated that Pakistan’s wheat output dropped to 26.4 million metric tons, falling short of the projected consumption of 30.4 million tons.

The country’s wheat shortage was exacerbated by the rise in global prices brought on by the Russia–Ukraine war.

“There is a shortage of food grain in Pakistan. And there is a decision also to import a certain quantity of wheat utilizing various options, international bidding and [government-to-government] options,” the Foreign Affairs Ministry spokesperson told reporters on May 27.

“In this regard, the government is in touch with friends and partners, and we are also in consultation with the Russian side on this subject,” the spokesperson added.

The ministry also noted that Pakistan has an “open policy,” implying that the government will seek “options and avenues” when there is a “national interest.”

The government also raised fuel prices by 30 rupees ($0.15) per liter on May 27 to meet the International Monetary Fund’s condition to revive the $6 billion bailout package for Pakistan.

The country is at risk of economic default amid political uncertainty. Finance Minister Miftah Ismail said on May 29 that Pakistan needs $36 billion to $37 billion in the next fiscal year and must pay about $21 billion in foreign debt due next year.