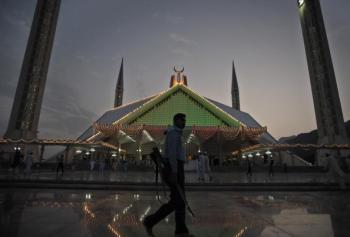 Deputy Islamabad police chief Bin Yameen stated that the men “have confessed in a statement that they provided finances and other assistance to Faisal Shahzad," reports Reuters. Journalist Zeeshan Haider also outlines the fact that “They have been held since May but until now Pakistani authorities had not formally announced their arrest. Shahzad, an American of Pakistani origin held in the United States, has admitted all charges against him in connection with the plot, in which he is accused of trying to detonate a crude bomb in a car on May 1. Times Square was evacuated when the vehicle was discovered.”

Yameen said the three men to be charged are Shoaib Mughal, who owns a computer business, Shahid Hussain, a former employee of a Norwegian mobile telephone company, and Humbal Akhtar, a multi-media designer, according to Reuters. The Associated Press describes them as being “relatively wealthy Pakistanis. They also report an intelligence officer speaking on customary condition of anonymity revealed that “an unspecified number of other suspects were still under investigation, but confirmed that two people previously held had been released. He identified one of those as Salman Ashraf, the co-owner of a catering company the U.S. Embassy accused of terrorist ties.”

The security official told Reuters that “the three were in possession of maps of New York's Times Square as well as of key Pakistani institutions like parliament, adding they were also suspected of providing shelter for other terrorists. Yameen said the three suspects appeared before a court on Tuesday and were put into detention for 14 days. They were perpetrators, they were financiers and have close links with the TTP," he said, referring to Tehrik-e-Taliban Pakistan, the main Pakistani Taliban umbrella group. The Pakistani Taliban, which claimed responsibility for the failed Times Square bombing, last week vowed to carry out attacks in the United States and Europe ‘very soon.’"

He did not give specifics, but terrorism crimes can be punished by death in Pakistan. It was unclear if the men had been appointed lawyers yet. Terrorism trials in Pakistan are always behind closed doors and often last for many months, if not years.

“Last week, U.S. prosecutors charged Pakistani Taliban leader Hakimullah Mehsud in absentia with involvement in a plot that killed seven CIA employees at a U.S. base in Afghanistan in December, according to Reuters.

The U.S. Department of State also announced last week that it is “offering rewards of up to 5 million each for information that leads law enforcement or security forces to Hakimullah Mehsud and Wali ur Rehman” in its Rewards for Justice program. “Under their direction, the terrorist organization Tehrik-e-Taliban Pakistan launched a suicide bombing at a U.S. military base in Afghanistan, attacked the U.S. Consulate in Peshawar, Pakistan, and planned the failed bombing in New York City’s Times Square.

In southern Asia, Mehsud and Rehman have planned and organized the killing of citizens from both the United States and Pakistan,” remarked Robert A. Hartung during the Sept. 1 Department of State press briefing. He added, “The RFJ program has been an effective tool in our fight against international terrorism. Since its inception in 1984, the program has paid more than $100 million to more than 60 people who provided credible information that prevented international terrorist attacks or helped bring terrorists to justice."