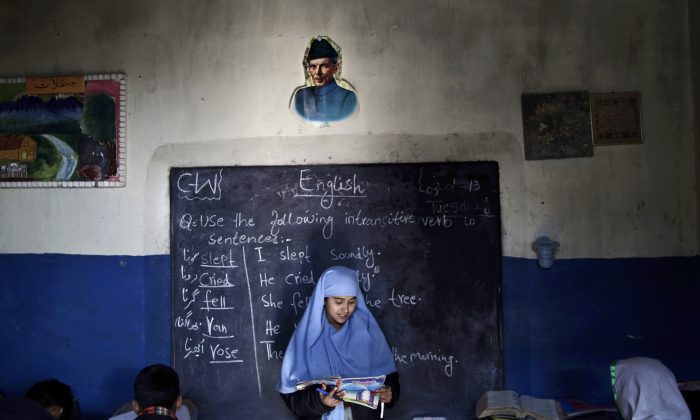 Sadia Mukhteya, 12, who was displaced with their family from Pakistan's tribal areas due to fighting between militants and the army, reads in front of the class during an English language lesson at a school in a slum on the outskirts of Islamabad, Pakistan, Thursday, Jan. 3, 2013. (AP Photo/Muhammed Muheisen)
Middle East

PESHAWAR, Pakistan—Pakistan closed schools across the country on Wednesday on the anniversary of last year’s Taliban attack that killed over 150 people, 144 of them schoolchildren, officials said.

The closure was part a day of national mourning and a precaution against militant attacks tied to the anniversary, said government spokesman Mushtaq Ghani.

Pakistan’s top civilian and military leadership attended a ceremony in the northwestern city of Peshawar to award medals to the victims’ families.

In his address, Prime Minister Nawaz Sharif resolved to weed out militant extremism, promising that: “We will take revenge for every drop of our children’s sacred blood.”

In the wake of the attack, Pakistan stepped up its campaign against Islamic extremists, lifting a moratorium on the death penalty and trying alleged militant extremists in military courts. The Pakistani army claims to having killed 3,400 Islamic extremists in a major military push in the North Waziristan tribal region along the Afghan border, which has long served as a safe haven for local and al-Qaida linked foreign militants. The operation was launched in June 2014, six months before a team of six or seven Taliban militants stormed the army-run school in Peshawar; the attackers all either blew themselves up or were shot and killed by the army.

The main Taliban umbrella group led by Maulvi Fazlullah, who has been based in neighboring Afghanistan, claimed responsibility for the attack, saying it was revenge for the North Waziristan campaign.

Pakistan Tells US Envoys It Hopes to Revive Afghan Talks

The Taliban and their allied Islamic militants have been waging a war against the state for over a decade, killing tens of thousands of people in a bid to install their own harsh interpretation of Islam.

Various public and private organizations held rallies across Pakistan to commemorate the tragedy and show solidarity in the fight against Islamic extremists.

For several days, mourners have placed flowers and floral wreaths, lighting candles and pasting the victims’ photos in various cities.

One of the people attending the Peshawar ceremony was Andleeb Aftab, a teacher at the school who was wounded in the attack and whose 14-year-old son Huzaifa was killed.

“My son is a martyr. Martyrs never die. I still feel that my son is around,” she told The Associated Press. “I see him playing on the school grounds. Every child of this school is my son.”