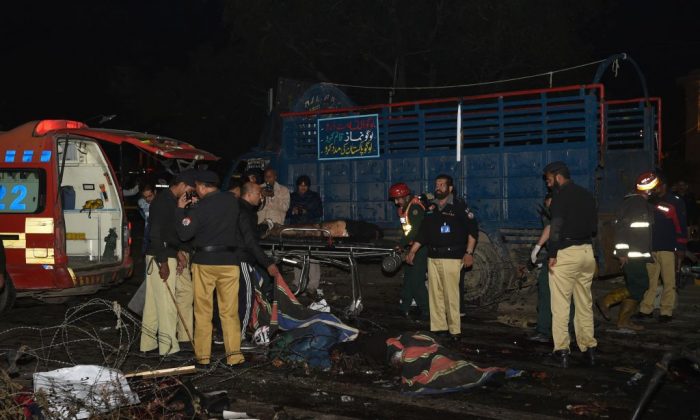 Pakistani policemen and volunteers move the bodies of victims at the site of a bomb explosion in Lahore on Feb. 13, 2017. (ARIF ALI/AFP/Getty Images)
International

LAHORE, Pakistan—Pakistani police say a large bomb has struck a protest rally in the eastern city of Lahore, killing at least seven people and wounding 40.

Local police official Zaheer Abbas says Monday’s blast occurred when a man on a motorcycle rammed into the crowd of hundreds of pharmacists, who were protesting new amendments to a law governing drug sales.

A Taliban faction claimed the attack.

Abbas says two senior police officers, including a former provincial counterterrorism chief, were among those killed.

Live TV registered a loud bang and showed smoke and fire billowing up as people ran away, some of them carrying the wounded.