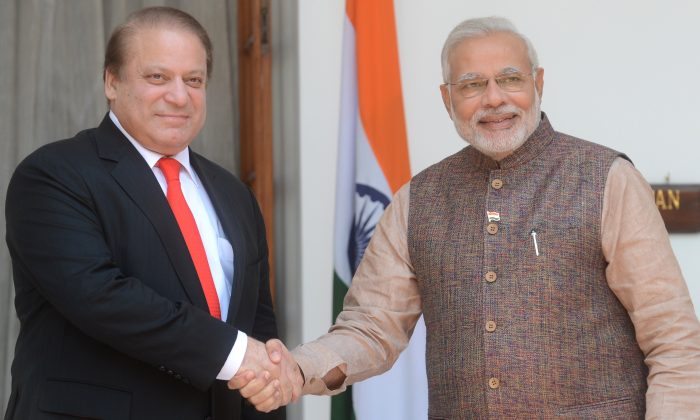 The elaborate diplomatic dance between India and Pakistan has been interrupted once again. The two sides remain far from a major breakthrough in their troubled relationship. As long as the Pakistani army continues to view India as an existential threat and maintains its grip over security policy, the twain may never achieve permanent peace.

India has called off the meeting between its Foreign Secretary Sujata Singh and her Pakistani counterpart Aizaz Chaudhry that was scheduled for Aug. 25 in Islamabad, after Pakistan’s high commissioner in Delhi met Kashmiri separatist leaders. This has ended the euphoria following Prime Minister Nawaz Sharif’s journey to New Delhi for the inauguration of Prime Minister Narendra Modi last May.

Pakistan’s decision to remind Indians of their dispute over Kashmir followed Modi’s comments about Pakistani support for terrorism during a recent visit to Kargil, where the two countries fought a war in 1999.

Both Sharif and Modi spoke of the need to bury the hatchet during their meeting on the occasion of Modi’s inauguration. But the expressions of desire for normalization could not contain the more substantive problems in the India–Pakistan relationship. India remains unhappy over Pakistan’s failure to prosecute terrorists involved in the 2008 Mumbai attacks. Sharif, on the other hand, must deal with hard-liners in Pakistan’s military who insist on seeing India as their country’s permanent enemy—unwilling to look too closely at the terrorists involved in the attack.

For India, the 26/11 Mumbai attacks were as much a challenge as the 9/11 assault was for Americans. The 12 coordinated shootings and bombings carried out by 10 Pakistani terrorists killed 164 people and terrorized India’s commercial capital for almost three days before commandos flushed them out of various buildings, including five-star hotels and a Jewish Community Center. The images of the attacks, telecast live into Indian homes, are seared in the memory of most Indians.

Although Pakistan arrested several individuals involved in planning and executing the Mumbai attacks, prosecution has been repeatedly delayed. Intelligence reports, including some from U.S. sources, have indicated that the detained commanders of Lashkar-e-Taiba, or LeT, enjoy amenities not available to prisoners. Some have been found passing instructions on the phone to operatives. Recently, their trial was once again postponed without recording evidence or other substantive proceedings.

LeT chief Hafiz Muhammad Sayeed remains free, appearing on television spouting venom against India, Israel, and the United States from his massive headquarters near Lahore. Indian officials read Pakistan’s refusal to prosecute the 26/11 accused or clamp down on Hafiz Sayeed as a sign of reluctance in shutting down anti-India jihadi groups.

In July Pakistan’s military launched a military operation against terrorist safe havens along its border with Afghanistan, yet the Pakistani state is far from shutting down the jihadi infrastructure built since the 1980s war against the Soviets in Afghanistan and the subsequent militant uprising in Kashmir during the 1990s.

The Pakistani military continues to seek military advantage against India even though the possession of nuclear weapons by both countries should deter the prospect of war. Jihadis offer a sub-conventional deterrent to Pakistan against India’s overwhelming advantage in conventional military capability. Most Pakistani civilian politicians recognize the dangers of reliance on terrorism as an element of Pakistan’s strategic planning, but the military retains tight control over foreign and national security policy despite return to civilian rule in 2008.

Like his civilian predecessor Asif Ali Zardari, Sharif has declared normalization of relations with India as a priority. Zardari’s government tried to open travel and trade and, in 2011, agreed to Most Favored Nation status for India. Despite completion of legal formalities, the status has not yet been granted, demonstrating behind-the-scenes military influence.

After his election last year, Sharif renewed talk of normalizing relations with India, with special emphasis on trade. India and Pakistan have a combined population of 1.4 billion, share a 2,000-mile border and a common history until 1947. Their languages are mutually understandable, and parts of their populations have overlapping ethnicity.

There is also significant complementarity in the two neighbors’ economies. Still, trade between them amounted to only $2.6 billion last year, less than 0.5 percent of India’s total commerce. As a businessman, Sharif said he understands the benefit of freer trade between the two countries.

Rhetoric and expressions of desire for more trade notwithstanding, security remains the overarching consideration in India-Pakistan ties.

Sharif’s participation in Modi’s inauguration was billed as the first time a Pakistani prime minister had attended such celebrations in India—an opportunity for laying foundations of a new relationship between India and Pakistan. The prospect of a new beginning, however, was soon undermined by incidents of firing along the Line of Control in Jammu and Kashmir. The two countries have fought for the control of Kashmir since 1947.

According to Indian officials, Pakistan has violated the cease-fire in the disputed territory 54 times this year through July 16 and 19 times since the Modi government took office May 26. Defense Minister Arun Jaitley told parliament recently that Pakistan violated the ceasefire agreement 199 times last year. Pakistan flatly denies reports of these incidents just as it denies support for jihadi groups operating in Kashmir though they operate in full view of Pakistani and international media.

There are many logical reasons for why and how Indian-Pakistan ties can be normalized. Psychological, not logical, factors have held the relationship back so far. Since the country’s birth through India’s partition in 1947, Pakistanis have sought to define their national identity through denial of commonality with India.

Disputes, such as the one over Jammu and Kashmir, have over the years become more symptom than cause of tensions in the subcontinent. At the heart of the problem is Pakistan’s carefully nurtured national narrative and state ideology, diametrically opposed to India’s view of itself as the region’s pre-eminent power.

Since independence, Pakistanis have been told, and with greater vehemence since 1977 with the rule of military dictator Muhammad Zia ul-Haq, that their country is a “citadel of Islam,” that its destiny is to be an Islamic State and its army is “the sword of Islam.” Advocates of modern, secular values, even pluralism, are denigrated as “enemies of the ideology of Pakistan,” therefore cast as “traitors to Pakistan.” Pakistan’s establishment, led by its military, also seeks parity with India, not only in the legal sense of sovereign equality between nations but in military and political terms.

This ideological milieu has helped religious-political groups exercise greater influence on national discourse than is justified by either the size of their membership or number of votes in Pakistan’s sporadic general elections and led to the outgrowth of jihadi groups, one more extreme than the other.

Pakistan’s state ideology has undermined prospects for peace with India since 1950, when Pakistani Prime Minister Liaquat Ali Khan traveled to Delhi and signed the first major agreement. The optimism about the agreement died within a year with the assassination of its Pakistani signatory. Pakistan has since gone through years of political instability while the army has gained influence in policymaking.

Over the years, Pakistan participated in U.S.-led anti-communist military alliances to secure military hardware that would enable it to deal with a larger, ostensibly hostile neighbor. It has fought four wars with India, including the one in 1971 resulting in the creation of Bangladesh, leaving Pakistan with half its 1947 territory. Although Pakistan has acquired nuclear-weapons capability, its insecurity in relation to India has not diminished.

Soon after independence, Pakistan’s founder Muhammad Ali Jinnah had said that he expected India and Pakistan to live alongside each other like Canada and the United States. But as long as Pakistan’s establishment continues to paint India as an existential threat and a permanent enemy in the minds of its people, no Pakistani leader—civilian or military—can embrace the Canada–U.S. model. For now, the two sides will maintain their well-worn pattern of diplomatic engagement interspersed with periods of intense hostility.

Husain Haqqani, director for South and Central Asia at the Hudson Institute, Washington, D.C., served as Pakistan’s ambassador to the United States. He is author, most recently, of “Magnificent Delusions: Pakistan, the United States and an epic history of misunderstanding.” © 2014 The Whitney and Betty MacMillan Center for International and Area Studies at Yale.