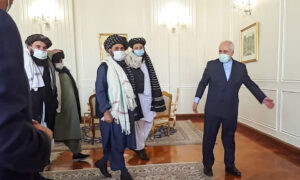 Pakistan-India Ceasefire a Response to Developing Situation in Afghanistan

NEW DELHI—The emerging situation in Afghanistan with the drawdown of U.S. troops calls attention to the ceasefire agreed to by India and Pakistan a few months ago, said experts.

India and Pakistan announced a ceasefire for the first time in two decades on their heavily militarized, disputed border in late February.

The ceasefire can’t be seen as an independent incident and there’s a regional context to the situation that’s determined by the larger border disputes that have persisted in the region since British colonial times, the crisis situation in Afghanistan, and the terrorist machinery that operates across borders between India, Pakistan, and Afghanistan, said experts.

Abhinav Pandya, a strategic analyst and the CEO of the India-based think tank Usanas Foundation and the former advisor on terrorism and radicalization to the governor of Jammu and Kashmir during the political reorganization of the state in 2019, told The Epoch Times over the phone that there are many motives behind the ceasefire, and one of them is linked to Afghanistan.

Pakistan wants to create for itself the image of an “economic powerhouse and a responsible diplomatic player” and wants to come out of the grey list of FATF (Financial Action Task Force) for which it has to convince the global anti-money laundering watchdog that it has stopped terror financing from its soil, said Pandya.

“Now since Americans are withdrawing and a lot of other countries are taking interest in Afghanistan, this is the time when Pakistan would want a very smooth and clear transition to the Taliban. For that, it needs to create an image where it’s seen in a good light by Western powers like America or maybe Russia, or even China, that it is a country that can be used to create a good, stable, and efficient functioning government in Afghanistan, a responsible Taliban in Afghanistan,” said Pandya.

Vicky Nanjappa, an Indian reporter who has covered some major terrorist attacks in India and also the rise and fall of the Indian Mujahideen told The Epoch Times on the phone that Pakistan would have likely been downgraded to the FATF black list if the ceasefire wouldn’t have happened and if there were more violence on the India-Pakistan border.

“Pakistan is under a lot of pressure from China and the U.S. to play a bigger role in ensuring peace in Afghanistan. The ceasefire pact was only a larger message by Pakistan to the rest of the world that it is perfectly capable of ensuring peace in the [Kashmir] valley which has been the biggest contentious point between India and Pakistan,” said Nanjappa,. This message allows Pakistan to make others believe that it wants peace in the region, she said.

Pandya said, Pakistan isn’t focusing on Kashmir these days and has instead shifted its focus to Afghanistan.

“There was news that 10,000 cadres have infiltrated from Pakistan to Afghanistan. So maybe there’s a strong possibility that cadres of the Pakistan-sponsored, Kashmir-focused terror groups like Lashkar-e-Taiba (LT), Jaish-e-Mohammed(JeM), and Al-Badr are being diverted to Afghanistan,” said Pandya who’s the author of the book, Radicalization in India: An Exploration.

Pandya, who’s researching terror financing in Kashmir for his next book, was referring to Afghan President Ashraf Ghani’s claims at an international conference in Tashkent on July 16 where he said 10,000 takfiri terrorists have entered Afghanistan from Pakistan. Takfiri are Muslims who accuse other Muslims of apostasy.

“Contrary to repeated assurances by Prime Minister Khan and his Generals that Pakistan does not find a Taliban takeover in Afghanistan in Pakistan’s interest and short of the use of force will use its power and influence to make the Taliban negotiate seriously, networks and organizations supporting the Taliban are openly celebrating the destruction of the assets and capabilities of the Afghan people and State,” said Ghani at the Central and South Asia connectivity conference. Pakistan denied the allegations.

Pandya said in addition to announcing the ceasefire with India, Pakistan has also created terrorist organizations inside Kashmir with regular sounding names like The Resistance Force (TRF) and the People’s Anti-fascist Force with an aim to wash its hands of terrorism in the region.

A research paper by the European Foundation for South Asian Studies (EFSAS) called the TRF “Old Wine in a New Bottle” and said that the sense of disarray that prevails due to the pandemic has been hijacked by terrorist organizations like the TRF in Kashmir.

TRF came into existence after the political reorganization of Jammu and Kashmir in 2019 and since then has been involved in a series of violent attacks in Kashmir including the killing of five Indian soldiers along the disputed border in April 2020 in which five terrorists were also killed, two of which were Pakistanis, according to the intelligence reports quoted by EFSAS.

The paper alleged that Pakistan’s military establishment and its intelligence agency, the Inter-Services Intelligence (ISI), have an “ongoing strategy of diverting attention from Rawalpindi’s trusted terrorist proxies such as the Lashkar-e-Taiba (LeT), Hizbul-Mujahideen (HM), and Jaish-e-Mohammed (JeM), for the purposes of giving them space for recalibration and ostensibly changing the character of the violent extremism in the region.”

EFSAS cited intelligence reports about Pakistan elements and LeT involved in terrorist activities carried out by the TRF in Kashmir against the Indian forces and political and elected leaders.

“A consensus forming between intelligence forces and analysts dealing with violent extremism in J&K [Jammu and Kashmir] has concluded that the TRF is yet another terrorist front created by the Pakistani Military establishment and the ISI, in their pursuit of using Kashmiri youth as proxies against India. Its formation was particularly intended to lift international pressure and scrutiny over Pakistan’s sponsorship of terrorism, which is also the reason why the Lashkar-e-Taiba, Hizbul Mujahideen, and Jaish-e-Mohammed have remained rather on the low since the Pulwama attack in 2019,” said EFSAS. In February 2019 in the Pulwama district of Jammu and Kashmir a vehicle-borne suicide bomber attacked Indian security personnel.

The paper said the “secular sounding” names of the terrorist fronts is to help conceal the “tag Jihadist movement and to gain sympathy and traction from global left-liberals and human right activists.” This will help Pakistan come clear against the allegations of being the “incubator of terrorism,” said EFSAS.

The Taliban have denied ties with Lashkar-e-Taiba and Jaish-e-Mohammed, and its spokesperson in an exclusive interview with the Indian broadcaster, Zee News on July 18 said that it wouldn’t allow any international terrorist organizations to use Afghan soil for terrorism.

Pandya said this is a diplomatic tactic. He cited reports last year about Afghan forces seeking to intercept Taliban fighters in Afghanistan’s Nangarhar Province and instead finding Jaish-e-Mohammed cadres.

In the bloody conflict in which Afghan forces lost four soldiers, ten of the fifteen men they killed were Jaish-e-Mohammed terrorists being trained for operating in Jammu and Kashmir, according to varied Indian media reports.

Last year’s report from the UN Security Council’s analytical support said that both LeT and JeM have hundreds of armed fighters co-located with the Taliban forces in Nangarhar. Both the groups were named as terror groups for the first time in the BRICS summit in Xiamen, China in 2017.

Much has been written about the ceasefire between India and Pakistan since it was jointly announced on Feb. 25 with some reports even claiming that for the first time ever India could participate in a joint military exercise later this year in Pakistan amid the fresh peace initiative between the two nations.

Defense sources based in New Delhi told The Epoch Times on Friday that the government of India hasn’t yet taken any decision about sending the Indian military for the joint exercise in Pakistan.

Political Reorganization of the Region

The withdrawal of U.S. forces from Afghanistan is one of the factors that compelled the Indian government led by Narendra Modi to revoke Article 370, a constitutional provision that determined the status of Jammu and Kashmir that acceded to India in 1947, according to an analysis by Sarral Sharma, published on the South Asian Voices, an online policy platform by the Washington DC based Stimson Center.

“New Delhi is likely worrying that if the United States withdraws from Afghanistan and the Taliban returns to power, Pakistan-backed terror groups might get training in Afghanistan and turn their attention to J&K,” said Sharma after the reorganization happened in 2019.

The erstwhile state of Jammu and Kashmir before accession to India in 1947 shared borders with Pakistan, a narrow stretch with Afghanistan, and a larger tract with what’s now Xinjiang and Tibet.

Since then India and Pakistan have fought four wars with each other over the region and the controlled boundaries have shifted while the disputes and heavy militarization have continued.

India no longer has a functional border with Afghanistan and portions of the Jammu and Kashmir state are controlled by Pakistan and China. In 2019 India enacted special laws to bifurcate its administered region into two federally governed territories of Jammu and Kashmir, and Ladakh.

The region has increasingly become the central focus of India and Pakistan’s foreign policies and covert and overt military strategies with each other.

China and Pakistan are building the China-Pakistan Economic Corridor through the disputed territory much to India’s displeasure, while Pakistan has announced that Gilgit-Baltistan, which India claims as a part of its federal state of Ladakh, will be its new province. Gilgit-Baltistan has been  administered by Pakistan as an autonomous region since the first ceasefire between India and Pakistan in 1949.

Satoru Nagao, Ph.D., a non-resident fellow at the Washington DC-based Hudson Institute told The Epoch Times over the phone that there are many references in the past to how the situation inside Afghanistan greatly affects the terrorism situation inside Jammu and Kashmir. India’s constitutional decisions over the region are determined by these wider regional contexts, he said.

“Since 2011 when the U.S. killed Osama Bin Laden, the U.S. wanted to withdraw from Afghanistan. Prime Minister Narendra Modi had realized this situation and he started to prepare for the U.S. withdrawal from Afghanistan [when he came to power in 2014]. He understood the connection between Afghanistan and Jammu and Kashmir,” said Nagao. Modi’s decision to divide Jammu and Kashmir into two federally governed territories is influenced by this context, Nagao said.

“Federal government can impose strong security measures to prevent terrorists from Afghanistan from entering Jammu and Kashmir,” he said.

Nagao has tabulated data on the overall fatalities in Kashmir since 1988 in a paper that’s published on Asan Forum and it shows a drastic decrease in numbers as the United States entered Afghanistan after the 9/11 terror attacks.

“After the 9/11 terror attacks, the large-scale operations of the U.S. forces in Afghanistan could be seen as exerting some impact, adding to the times when pacification was undertaken against terror activities in Kashmir. Now, amid the impending withdrawal of these forces, the Kashmir situation has begun to heat up, one factor prompting India’s strong move,” wrote Nagao in his paper.