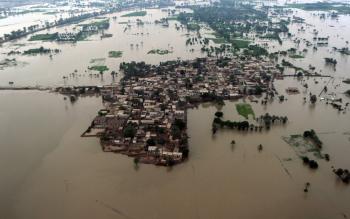 This aerial view from a Pakistan army rescue helicopter shows the flooded area of Kot Addu, in the southern province of Punjab on August 8, 2010. (Arif Ali/AFP/Getty Images)
World

The number skyrocketed nearly 2 million from Saturday’s figure of just over 4 million, after the U.N. generated a new estimate with provincial authorities of Baluchistan, Punjab, and Khyber Pakhtunkhwa, formerly known as the North-West Frontier Province.

“Things will probably get worse, before they start getting better,” said U.N. Humanitarian Coordinator in Pakistan Martin Mogwanja in a U.N. News Centre report. “We are working at full speed to respond to the most urgent needs of the affected populations.”

The floods, which began in northwest Pakistan, have reached hundreds of villages in the southern province of Sindh.

The Torhi protective bund in the province’s north has been breached and several barrages and embankments could also break soon.

“While comprehensive estimates are not yet available, it is certain that hundreds of thousands, if not millions, are being affected in this province,” said Dennis Bruhn, a U.N. disaster management expert who arrived at Sindh on Sunday.

Heavy rain will continue to pour in the province for at least three more days, according to forecasts.

The U.N. said that until the monsoon-triggered floods retreat, it is almost impossible to assess damage and send urgently needed aids to people in the hardest-hit areas.

“We are particularly concerned about the needs of 600,000 people, who remain completely cut off in the north of Khyber Pakhtunkhwa, especially as no helicopter deliveries have been possible for three days because of bad weather,” said Wolfgang Herbinger, Country Director of the U.N. World Food Programme.