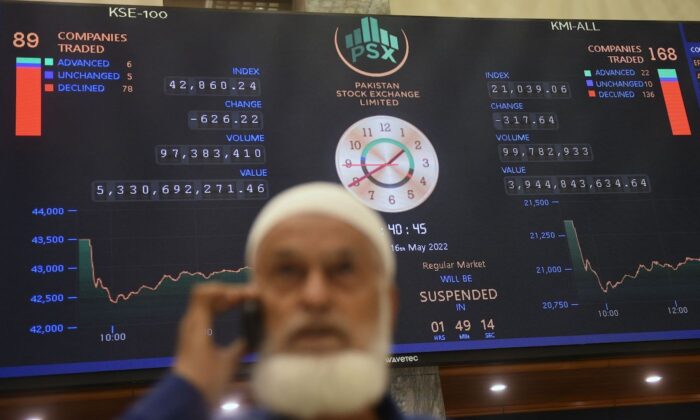 A stockbroker speaks on a phone while monitoring the share prices during a trading session at the Pakistan Stock Exchange (PSX) in Karachi on May 16, 2022. (Tabassum/AFP via Getty Images)
Asia & Pacific

Foreign reserves held by the State Bank of Pakistan fell by $190 million to $10.3 billion this month, sending the Pakistani rupee to an all-time low in the interbank market of 191.77 rupees per dollar, according to local reports.

The country’s account deficit could increase to $17 billion by the end of the 2022 fiscal year, up from the projected $7 billion, because of the “unsustainable” cost of imports, according to Shabbar Zaidi, former chairman of the Federal Board of Revenue.

“The risk of default may loom large in fiscal year 2023, so there is a need to curtail imports of both goods and services in the range of $5 billion and $2 billion, respectively,” he said, The News International reported.

Farrukh Salem, a Pakistani political scientist, said, “The pressure on the rupee is mounting due to receding dollar inflows and a lack of support from friendly countries, including China, Saudi Arabia, and the United Arab Emirates,” Asia Times reported.

China is a close ally of Pakistan, investing over $65 billion in infrastructure under the China–Pakistan Economic Corridor (CPEC), which is part of Beijing’s Belt and Road Initiative (BRI). Other countries, including the United States, have criticized the BRI infrastructure program as a “debt trap” for smaller nations.

Finance Minister Miftah Ismail was meeting with International Monetary Fund (imf) officials in Doha this week for talks regarding the $6 billion bailout package fund. Pakistan wants the program extended and a $1 billion tranche released under the Extended Fund Facility.

Pakistan entered the $6 billion, 39-month funding program with the IMF in July 2019, but the funding stalled earlier this year because of issues over the required reforms. The IMF agreed to revive the program and has so far disbursed $3 billion to Pakistan.

A U.S. State Department official has reportedly assured Pakistan of strong support from the United States for efforts to rebuild the South Asian nation’s economy, the report said.

Khan was ousted after losing a vote of confidence in parliament, which was initiated by a united opposition that blamed him for mismanaging the country’s economy and foreign relations. He had called for fresh elections to be held.

Massive protests erupted in April after Khan called on his supporters to reject the “new imported government.” He accused the United States of plotting “a foreign conspiracy” to topple his government after his two-day visit to Russia in late February, which coincided with Moscow’s Ukraine invasion.

Washington responded by saying that there’s “absolutely no truth to these allegations.”

Pakistan’s new coalition government said it faces enormous economic challenges, with the fiscal deficit likely to exceed 10 percent of gross domestic product at the end of the current financial year in June ahead of presenting the annual budget.