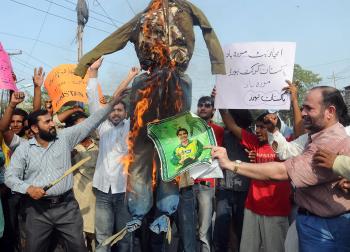 Pakistani cricket fans hold a burning effigy of national cricket team captain Salman Butt during a protest against a match fixing scandal, in Lahore on Aug. 31. (STR/AFP/Getty Images)
US

Nick Mclaughlin
View profile
Follow
biggersmaller
Print
The Pakistan cricket team is embroiled in allegations of spot-fixing in their recent match against England at Lords, the home of cricket.

The spirit of cricket has been tarnished in the latest scandal involving a number of Pakistani cricketers and the alleged match fixer Mazhar Majeed.

Mazhar Majeed, a property developer and sports agent, was arrested and has since been released on bail following a sting set up by British tabloid News of the World.

Mr. Majeed was caught on film before the fourth test appearing to accept £150,000. In exchange he would make sure no-balls were deliberately bowled at certain times in the test.

The British tabloid reported that Pakistan test captain Salman Butt had said that the allegations were not proven. Therefore, suspending players was not in their immediate plans.

The International Cricket Council's (ICC) anti-corruption and security unit (ACSU) is investigating the claims, according to the tabloid.

"Make no mistake, once the process is complete, if any players are found to be guilty, the ICC will ensure that the appropriate punishment is handed out," said Haroon Lorgat from the ICC said. "We will not tolerate corruption in this great game."

The iconic position held by cricket in Pakistan has taken a severe beating.

“The people back home are suffering because of the fight against fundamentalism and the floods…” said former Pakistan captain Ramiz Raja in The Daily Telegraph. “Now it is a new scandal and it has hurt the entire country because of the love and admiration they have for the players.”

Former New Zealand cricketing captain and match referee John Reid says Pakistan has been treated with kid gloves in the past and should now be tossed out of international competition.

"I've had so many dealings with Pakistan over the years for one reason or another, and they've always made excuses," he told the New Zealand Herald.

He said the young bowlers needed to be punished and there was no place for sympathy.

"They're good bowlers, but if it's their career that goes down the drain, too bloody bad. They've got to be banned, and for life," said the straight-talking Reid.

{etRelate 41870, 41956} Pakistan cricket has been troubled by a series of incidents in recent times – from the terrorist attack on the Sri Lankan cricket team to the refusal of other cricketing nations to tour Pakistan. And Pakistan players have been refused entry into the lucrative Indian premier league (IPL).

Pakistan has been forced to play many of their home series games overseas because of problems in their own country.

The Pakistan cricket team is set to tour New Zealand at the end of the year.