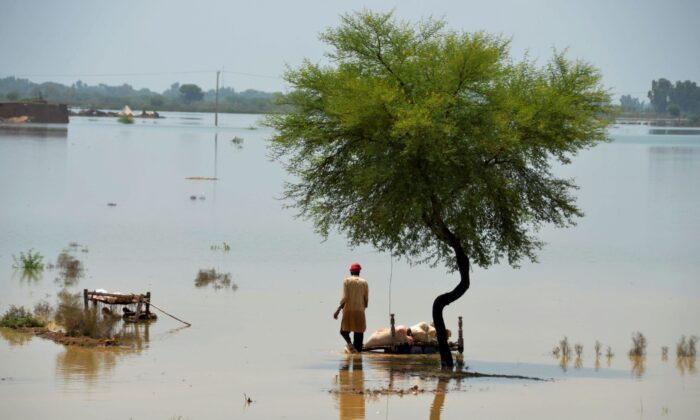 A villager uses cots to save usable items after salvaging from his flood-hit home, in Jaffarabad, a district of Pakistan's southwestern Baluchistan Province, on Aug. 27, 2022. (Zahid Hussain/AP Photo)
Asia & Pacific

Pakistan will seek financial aid from various institutions to support its rehabilitation in the wake of heavy monsoon rains and floods that cost the country’s economy over $4 billion, its foreign minister said on Sunday.

At least 1,033 people have died and over 33 million others were affected in Pakistan due to flash floods caused by heavier-than-usual monsoon rains that began in June. Sindh and Balochistan were among the provinces devastated by the floods.

The heavy monsoon rains in Pakistan were caused by La Nina climate conditions, which refers to cooler-than-average sea surface temperatures in the central and eastern tropical Pacific ocean.

In a June weather forcast, the nation’s minister for Climate Change Senator Sherry Rehman had warned that Pakistan’s upcoming monsoon season would be “a part of global La Nina weather pattern,” predicting above-normal rainfall until at least August along the foothills of the Himalayas, Azad Jammu and Kashmir, Gilgit Baltistan, and central parts of the Punjab region.

“The early onset of monsoons after a debilitating heat wave across South Asia has already wreaked havoc in parts of India and Bangladesh,” Rehman said in a statement.

“There is also some prediction that Pakistan could even experience a similar scale of floods that occurred in 2010 when one-fifth of the country was inundated,” she added, urging the local authorities to take precautions.

La Nina conditions also precipitated the abnormal rainfalls that caused the 2010 floods in Pakistan, which killed at least 1,000 people and affected 20 million others.

Foreign Minister Bilawal Bhutto-Zardari said the economic impact could exceed $4 billion due to the destruction of bridges and buildings. Floods have also severed agricultural activities in Pakistan.

Reconstruction will be difficult for Pakistan, which is already facing risk of economic default amid low foreign reserves and high inflation. Pakistan has asked the International Monetary Fund (IMF) to revive the $6 billion bailout package it entered in 2019.

The IMF board is expected to decide this week on whether to release $1.2 billion as part of the seventh and eighth tranches of the bailout program. Bhutto-Zardari said that both sides had reached a staff-level agreement.

“Going forward, I would expect not only the IMF, but the international community and international agencies to truly grasp the level of devastation,” he said in an interview with Reuters.

The minister added that Pakistan will issue an appeal requesting that United Nations member states contribute to relief efforts, after which Pakistan would look into constructing “climate change-resilient” infrastructure.

“In the next phase, when we look towards rehabilitation and reconstruction, we will have conversations not only with the IMF but with the World Bank, [and] the Asian Development Bank,” he said.

The United Nations said on Aug. 25 that it has set aside $3 million for U.N. aid agencies and its partners in Pakistan to support flood-affected areas, focusing on those more vulnerable.

Prime Minister Shehbaz Sharif has pledged to allocate Rs10 billion ($125 million) for Balochistan, which has been experiencing internet disruptions and power outages as a result of heavy rains, Daily Pakistan reported.

“The magnitude of the calamity is bigger than estimated,” Sharif said on Twitter Saturday.