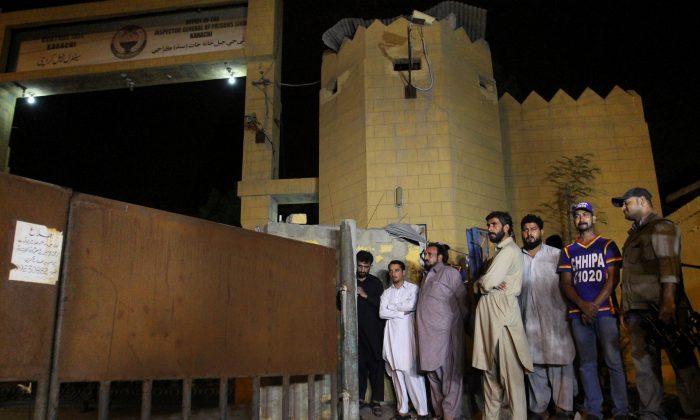 In this Tuesday, Aug. 4, 2015 file photo, family members of Shafqat Hussain, who was convicted and hanged for killing a boy, wait to receive his body outside the central jail in Karachi, Pakistan. (AP Photo/Fareed Khan)
Middle East

ISLAMABAD—For years, Pakistan did not put prisoners to death. Then a Taliban attack butchered 150 people, most of them children, and the country resumed carrying out the death penalty and quickly turned into one of the world’s most avid executioners.

But instead of killing militants, the campaign is largely executing common criminals, The Associated Press has found.

Only one in 10 of the 226 prisoners executed since December was convicted of a terror attack, according to human rights activists. Still, the executions continue in order to placate a public still angry over last year’s Taliban assault on a military school in the city of Peshawar.

The Pakistani government refuses to discuss the executions, and most on the street still support them. Some, however, are beginning to question whether the death penalty truly works as a deterrent in a country where suicide bombings remain a common militant tactic.

“You cannot deter those militants who are committed to die for a cause,” said analyst Hasan Askari Rizvi, a retired political science professor.

Pakistan under former President Pervez Musharraf halted executions in 2008, partly due to the pressure of human rights groups. The hiatus started after another terror attack shocked the nation — the assassination of former Prime Minister Benazir Bhutto amid a heated election campaign. The government blamed the Pakistani Taliban for that attack as well, though the militants never claimed responsibility for the assault and others questioned why elements of Pakistan’s powerful intelligence agencies failed to prevent her killing.

At the time of the pause in 2008, Human Rights Watch said some 7,000 people were on Pakistan’s death row and 36 had been put to death that year. The year before, authorities executed 134 people; they put to death 85 in 2006, 52 in 2005 and 21 in 2004. Officials discussed commuting the death sentences of those remaining to life in prison, but apparently never did.

After 2008, Pakistan’s military executed only one soldier in 2012 after convicting him of murder. Civilian authorities largely didn’t discuss resuming executions, even as the Pakistani Taliban and other insurgent groups continued their campaign of violence across the country, including suicide bombings and the 2012 shooting of future Nobel Prize laureate Malala Yousafzai.

The Dec. 16 attack changed everything. In Peshawar, Taliban gunmen stormed a military-run school, killing 150 people, nearly all children attending class. Popular anger raged against the militants, many of whom have long ties to sections of Pakistani intelligence services.

Prime Minister Nawaz Sharif used his strongest language yet against the extremists, vowing there would be no discrimination between “good or bad Taliban” as he allowed those convicted of terror charges to be executed. He also pledged to “continue this war until even a single terrorist is not left on our soil,”

Days later, Pakistan carried out its first executions by hanging Mohammed Aqeel, convicted of attacking an army headquarters near Islamabad, and Arshad Mahmood, put to death for his role in a 2003 plot to kill Musharraf. Other executions followed. In all, at least 21 people have been executed in terror cases involving a plane hijacking, attacks on soldiers and other violence, according to data from the independent Human Rights Commission of Pakistan.

In March, Pakistan quietly lifted its execution ban entirely and hangings surged. Over all, Pakistan has executed at least 226 people, according to the commission, though an exact number is difficult to ascertain as authorities decline to discuss the death penalty in detail. Repeated requests for comment by the AP to the Pakistani Interior and Information ministries have gone unanswered.

Officials also said Interior Minister Chaudhry Nisar Ali Khan was traveling abroad and unable to discuss the executions. However, Khan told journalists in August that the country had executed at least 211 people, including terrorists. He did not elaborate.

On the street, the executions remain incredibly popular among many Pakistanis, including those who lost loved ones in the Peshawar school attack.

But the rise in executions worries activists like Zohra Yusuf, the head of Human Rights Commission of Pakistan. While only murder and treason carried the death penalty when Pakistan gained its independence in 1947, now 27 offenses carry the possibility of execution, including blasphemy charges often used in personal disputes against minorities in this largely Sunni Muslim country. While no one has been put to death for blasphemy, those accused in the past have been killed by mobs.

Others have raised concerns about death-row inmates being beaten into confessing to crimes they didn’t commit or took part in as minors. In August, Pakistani authorities hanged Shafqat Hussain, who was convicted of killing a 7-year-old boy in 2004 when he was just 14, according to his family.

“There is a popular opinion in Pakistan that death penalty should not be abolished, but increasing incidents of terrorist attacks and routine crimes indicate that executions are not a deterrence,” Yusuf said. “Even after the resumption of executions, violence has continued. There have been incidents of sectarian violence and we also witnessed attacks on churches.”

Of the prisoners executed since December, most were convicted on murder charges. A confidential government report submitted to Pakistan’s Supreme Court and seen by the AP said 7,056 prisoners were on death row in 2014, while the Human Rights Commission of Pakistan said it believes the number is more than 8,000. It’s unclear how many of those on death row were convicted on terror-related charges.

Either way, Pakistan was one of the world’s top executioners this year, behind China, Iran and Iraq but ahead of Saudi Arabia, according to Amnesty International. The U.S. has carried out 19 in 2015 — 10 of them in Texas.

Pakistan carries out its executions at several locations, but all die by hanging.

A senior prison official and three other workers, all speaking on condition of anonymity as they weren’t authorized to talk to journalists, told the AP that executions are carried out before sunrise. The condemned has a final meal, bathes and then has time to pray before being led to the gallows, they said. Executioners cover their face with a black hood and tie their hands and legs before hanging them, they said.

How Pakistan Will Address Taliban Militancy After School Massacre

World War 3 Scenario? Some Worry ISIS Could Get Nukes in Pakistan

One of the last prisoners executed, 71-year-old Maqbool Husain, spoke to the AP before his death Aug. 27. He said a dispute between families over property saw him lose his right leg in an attack before his own family took revenge and amputated the leg of a rival. The other family killed two of his brothers in 1994 and Husain waited until 1996 before killing six of them in retaliation, he said.

Looking back on his life, he said: “I request all to end enmity so that no one faces hanging like me.”