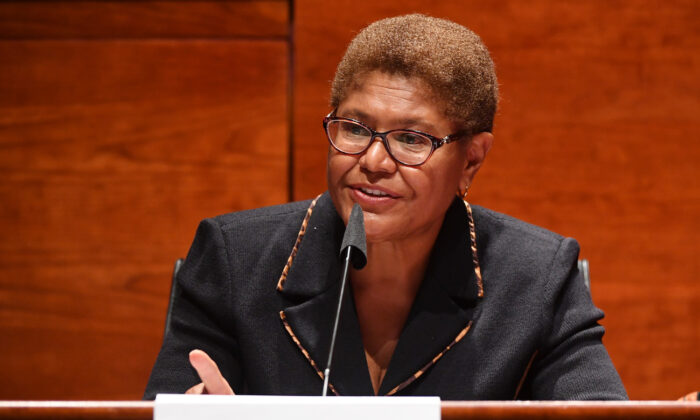 Pair Charged With Burglary at Home of Karen Bass

LOS ANGELES—Two men were charged Sept. 16 with breaking into the home of mayoral candidate Rep. Karen Bass in the Baldwin Vista section of Los Angeles and stealing two guns.

Patricio Munoz, 42, and Juan Espinoza, 24, pleaded not guilty to one felony count of first-degree residential burglary and two counts of grand theft of a firearm.

The two are accused of breaking into the home of Bass (D-Los Angeles) Sept. 9.

Munoz and Espinoza were arrested Tuesday, Sept. 13, night while in a vehicle in the area of Hazeltine Avenue and Sylvan Street in Van Nuys, according to Los Angeles police.

“Everyone deserves to be safe in their home,” District Attorney George Gascón said in a statement announcing the charges. “Residential burglary is a violation of that safety in the most fundamental way. Gun thefts have increased since the pandemic began. Many of these stolen guns are then used to commit violent crimes.”

“We will hold accountable the people responsible for breaking into Rep. Karen Bass’s home and stealing firearms from her or any other law-abiding gun owner in Los Angeles County,” the district attorney said.

The two are due back in a downtown Los Angeles courtroom Sept. 30, when a hearing is set to determine if there is sufficient evidence to require them to stand trial.