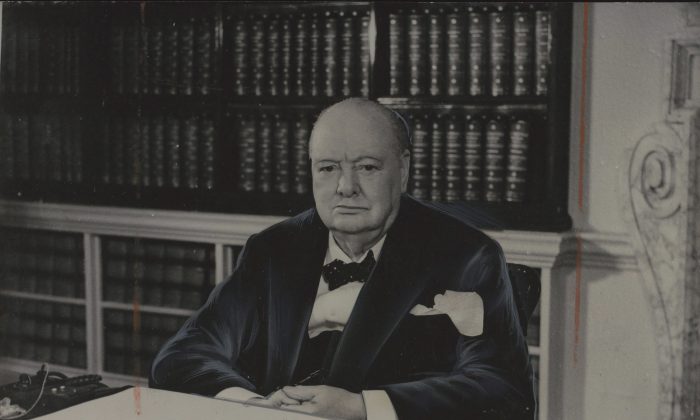 Sir Winston Churchill at his desk in the cabinet room of No. 10 Downing St. at age 79. Churchill’s painting of Emerald Lake in the Rocky Mountains sold for $87,000 despite being damaged. (The Canadian Press)
Canada

Painting of BC Lake by Winston Churchill Sells for Over $87,000

CALGARY—A painting of Emerald Lake in the Rocky Mountains by Winston Churchill has sold at auction for much more than expected.

Churchill painted the work in 1929 during a visit to the area near Field, British Columbia, in the years before he became prime minister.

The heavily damaged painting was initially listed on the Sotheby’s of London auction site and was estimated to sell between C$11,000 and C$15,000.

“My family and I are obviously delighted at the sale price,” owner Bill Murray wrote in an email from his home in Devon, England.

“Even in its damaged state it is a wonderful painting, and the link with Sir Winston’s visit to your area in 1929 is just about unique.”

The painting was a gift from Churchill to Murray’s father, Sgt. Edmund Murray, who was his bodyguard from 1950 to 1965.

“Having read all the pre-sale reports in the Canadian media, I am not really surprised that this great painting attained such a high figure. Churchill paintings are much sought-after,” Murray said.

“Had it not been damaged, it would have fetched a much higher price and perhaps ended up in a private collection in Russia or China, never to be seen again.”

There’s no official word on who bought the painting or where it will ultimately end up, but Murray said he has his suspicions.

“I am pretty sure that it will go to Canada, although Sotheby’s are very discreet when it comes to letting out information about the buyer, even to the seller.”

The painting was originally mislabelled as Lake Louise, Alta., but Calgary historian David Finch saw a photo of it and let it be known it was Emerald Lake.

“To be clear, I’m the obnoxious Canadian who challenged the location of the painting. [That’s how I] came to be involved but I’m not an expert at painting or Churchill history—I’m an innocent bystander,” said Finch.

Finch said Churchill had been painting for years, a hobby he picked up to cope with depression. He said the trip to Canada and the United States gave him a chance to escape his troubles at home.

“He’d been run out of England with his tail between his legs. His government had fallen. He’d lost his own seat. He was desperate for an escape from all his trials and tribulations so he and his brother and his two sons came on a tour of North America,” he said.

Finch said he’s no art critic but Churchill painted a lot of paintings over the years and this likely isn’t his best work.

“I don’t think much of it but somebody obviously does to pay that kind of money for it,” he said.