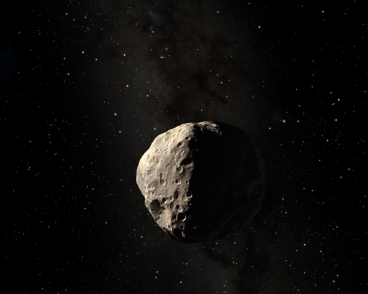 Paintballs Could Deflect Asteroids From Earth

If an asteroid were headed toward Earth, with enough advance notice, it’s possible we could send it off course using white paint.

By painting the asteroid bright white, it would reflect more sunlight, causing the sun’s photons to bounce off it and create solar radiation pressure that would eventually push the rock off its trajectory.

This solution was proposed by Sung Wook Paek at Massachusetts Institute of Technology.

Other scientists have put forward ideas like launching a rocket at an asteroid, using a spacecraft’s gravity to pull it off course, or releasing a cloud of pellets—an idea Paek improved upon by suggesting the pellets be filled with paint powder.

As an example, he used the asteroid Apophis, which may pass near Earth in 2029 and 2036, and calculated it would need five tons of paint, released from a spacecraft in two separate batches, to cover the asteroid front and back.

He worked out that the pressure on a painted asteroid could take up to 20 years to move its course away from Earth, which means plenty of advance notice would be required.

The paintballs could be made in space, for example on the International Space Station, where a spacecraft would collect a couple of rounds to fire at the asteroid. The payload would probably rupture on takeoff using traditional rockets.

Paek also suggested a couple of modifications, such as filling the pellets with aerosols, to “impart air drag on the incoming asteroid to slow it down.”

“Or you could just paint the asteroid so you can track it more easily with telescopes on Earth,” he said in a press release.

“It is very important that we develop and test a few deflection techniques sufficiently so that we know we have a viable ‘toolbox’ of deflection capabilities to implement when we inevitably discover an asteroid on an impact trajectory,” she said in the release.