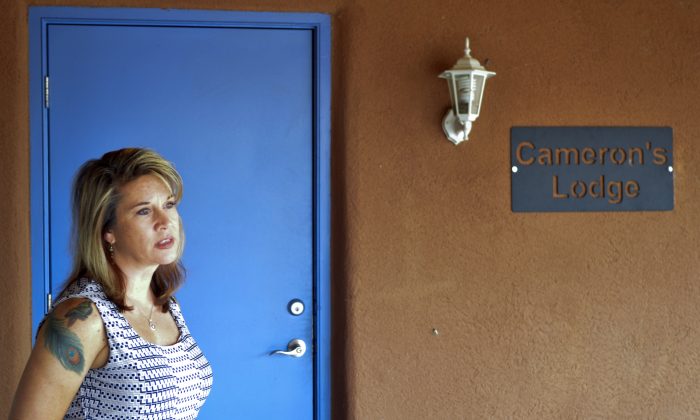 Jennifer Weiss-Burke, executive director of a youth recovery center, stands by one of the rooms at the recovery center named after her son, Cameron Weiss, in Albuquerque, N.M., on Aug. 9, 2016. He died of a heroin overdose in 2011. Weiss-Burke said her teenage son's descent into drug addiction started with an opioid prescription a doctor wrote for him for a wrestling injury. (AP Photo/Mary Hudetz)
US

COLUMBUS, Ohio—As Ohio’s overdose epidemic has climbed toward a record high, an army of lobbyists representing makers of prescription painkillers and their allies poured more than $3.5 million into Ohio political coffers.

Pharmaceutical companies and allied groups belonging to the Pain Care Forum lobbying collective gave nearly $2.5 million to federal candidates from Ohio from 2006 through 2015, according to data analyzed by The Associated Press and the Center for Public Integrity.

State-level giving of more than $1 million was directed at candidates of both parties, including governors, attorneys general, Ohio Supreme Court justices and legislative leaders, and committee chairs in power positions over Ohio health law. Republican Party committees received about $137,000, while Democratic ones got $41,000.

Pennsylvania Opioid Debate May Include Push for Pricier Pill

A huge chunk of the Ohio campaign cash identified through the analysis went to former U.S. House Speaker John Boehner, of southwest Ohio, who received about $875,000 over the decade, according to the data. Boehner was speaker for about half the period reviewed, from 2011 to 2015.

The investigation by AP and CPI found that the Pain Care Forum worked in Washington over the past decade to quietly derail efforts to curb U.S. consumption of pain-killing drugs, such as OxyContin, by promoting the vital role of prescription painkillers in Americans’ lives. That went hand in hand with a 50-state strategy.

Participating drug companies, associations and alliances also have other business before Ohio’s Legislature, but a steady flow of contributions from forum participants—who employed, on average, 37 lobbyists a year in the state—has meant their interests remain well represented when pain care issues arise.

Among state candidates, Republican Gov. John Kasich topped the list, with about $46,000. Top state givers among forum members were Pfizer, Abbott Labs, Merck and Johnson & Johnson. Abbott spun off its U.S. pharmaceutical operation in 2013 and no longer lobbies on related issues.

Kasich has championed a host of remedies to Ohio’s opioid problem, including creation of the Governor’s Cabinet Opiate Action Team within days of his 2011 inauguration. He has worked with state leaders since then to extend access to treatments and increase availability of the overdose drug naloxone and launched an education campaign for schoolchildren called Start Talking, among other initiatives.

Nonetheless, Ohio’s accidental drug deaths continued to skyrocket. Ohio overdose deaths have gone up annually over the past decade, from 1,515 in 2006 to 2,744 in 2015, according to the analysis. That 81-percent increase is the 7th highest among U.S. states over the period, the analysis found.

When a new record was announced last month, Kasich said it made him “feel terrible”—but he continued to stress the state’s progress and its leading role in tackling opioid addiction and abuse. A spokeswoman said Friday that Kasich has never allowed campaign contributions to affect the work of his office.

Burke received about $32,000 from forum participants from 2006 to 2015. He has chaired the Senate’s Medicaid committee, served on the budget-writing Finance Committee and was a champion of Ohio’s recently enacted medical marijuana law.

The drug companies and allied groups belonging to the Pain Care Forum also gave to dozens of other state lawmakers over the decade, including House speakers, Senate presidents and important committee chairs. The data reflect the minimum amount of what was given over the period.