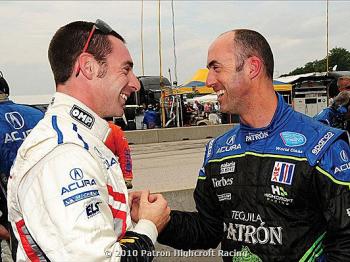 With Scott Sharp fielding his own GT team in ALMS in 2010 and Gil de Ferran looking to start an IndyCar team (possibly joining with Tony George’s Vision Racing) the pairing of Pagenaud, a young but very fast driver, with Brabham, a very fast and very experienced driver, in the series’ remaining Acura prototype, seems obvious.

"I'm very excited about 2010,” Pagenaud said in a press release from his new team. “The last two years in the American Le Mans Series have been very important for my career and I am looking forward to returning as a driver for the Patrón Highcroft Racing Team alongside David Brabham who I have a lot of respect for.”

25-year-old Simon Pagenaud, a native of France, started racing in the U.S. in 2006 in Formula Atlantic, where he beat Graham Rahal for the Championship. In 2007 he moved on to the Champ Car World Series, and in 2008 he started driving for the brand new de Ferran racing team in the ALMS. Pagenaud proved he was fast and steady in 2008, and in 2009 proved he could win in sports cars.

Under 2010 ALMS rules, LMP1 and LMP2 will be combined. Therefore, Patrón Highcroft will not run the new, and expensive, ARX-02a, opting instead for the ARX-01c, an updated version of the type of P2 car which Adrian Fernandez drove to a class victory in 2009. Patrón Highcroft will continue to work closely with Honda Performance Development (HPD), evaluating the new ARX and testing engines for the 2011 season..

“I enjoyed driving the ARX-01b in 2008 and the car went through a lot of development that year,” Pagenaud said in the press release. “I am looking forward to the updates on the ARX-01c for the 2010 season to make it even more competitive than it already is.”

"I am absolutely delighted that Simon is now part of the Patrón Highcroft team and will be my new teammate. Simon comes in as one of the quickest and best sportscar drivers out there. I think the two of us should be as quick as any of the combinations in the American Le Mans Series next year,” David Brabham said in the same press release.

"Having somebody like Simon come aboard provides added motivation for me because he is a very fast driver and I think we are going to push each other very hard to squeeze more speed out the ARX-01c. I don't want Simon to come in and be faster than me and he doesn't want to be joining his new team and be slower than his teammate either. We're both very team focused but our combination together should certainly push us forward.

"One of the advantages we'll have for 2010 is the fact that Simon and I are already very good friends and we have been working together with all the guys at HPD over the past couple of years.”