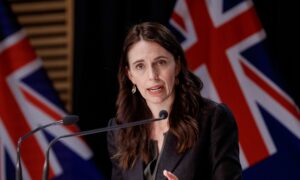 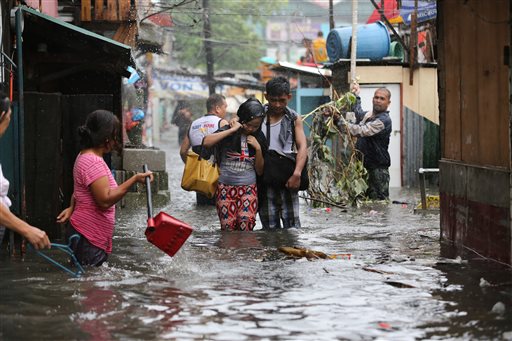 Residents wade through floods as they go back to their home while Typhoon Rammasun batters suburban Quezon city, north of Manila, Philippines on Wednesday, July 16, 2014. Typhoon Rammasun knocked out power in many areas but it spared the Philippine capital, Manila, and densely-populated northern provinces from being directly battered Wednesday when its fierce wind shifted slightly away, officials said. (AP Photo/Aaron Favila)
Asia & Pacific

Typhoon Glenda, also known as Rammasun, moved through the Philippines overnight and into Wednesday morning but shifted slightly to spare the capital Manila and densely populated northern provinces, the weather agency PAGASA said.

But the typhoon did kill at least 12 people across the country and knocked power out in metro Manila in addition to other areas.

The agency said in a 4:15 a.m. local time alert on July 16 that the storm accelerated while maintaining its strength, but the eye moves from Nagcarlan to Talisay to Imus to Manila Bay, before shifting to Bagaca, Bataan as of 9 a.m.

The typhoon is expected to exit landmass via Zambales by noon.

Despite Manila and the dense areas avoiding being directly pummeled, the typhoon’s strong wind and gusts brought down trees, electric posts and ripped off roofs across the capital of 12 million people where government offices and schools were closed. While there have been no reports of massive damages and flooding, officials warned the public the danger wasn’t over.

More than 370,000 people moved from high-risk villages to emergency shelters in six of the nation’s provinces.

The storm weakened before blowing out of the country later Wednesday, heading toward northern Vietnam or China’s Hainan Island, forecaster Jori Loiz said. He said it could regain strength while crossing the South China Sea.

In a shantytown at the edge of Manila Bay, hundreds of people fled when strong winds tore tin roofs. Most were drenched before they reached an evacuation center with the help of emergency workers.

Manila Mayor Joseph Estrada said he was relieved there were no reported deaths after the typhoon sideswiped his city, although its winds still downed trees and damaged seaside shanties, prompting more than 1,000 residents to evacuate.

“It was like a drill,” he said. “We hauled people away from dangerous seaside areas, whether they liked it or not.”

Officials reported at least 12 deaths elsewhere, mostly people pinned by falling trees and electrical posts. A fire volunteer died when he was hit by a block of concrete while hauling down a Philippine flag in suburban Pasig city, said Francis Tolentino, chairman of the Metropolitan Manila Development Authority.

Polangui Mayor Cherilie Mella Sampal estimated more than half of the 15,000 to 20,000 houses in her rice-growing town may have been damaged or blown away by the fierce wind and rain that came around nightfall.

While Albay is used to calamities inflicted by storms and Mayon, the country’s most active volcano, Sampal said her townfolk were apprehensive after witnessing the massive devastation and deaths wrought by Typhoon Haiyan in the central Philippines last November.

“We’re used to and prepared for calamities,” Sampal said by cellphone. “But when people heard that the eye of the typhoon will hit the province, they feared we may end up like the victims of Yolanda,” she said, referring to the local name of Haiyan.

Damage in Naga City from the typhoon. (Twitter/JessaMyIce)

Residents of the slum community of Baseco evacuate to safer grounds at the onslaught of typhoon Rammasun in Manila Wednesday, July 16, 2014 in Manila, Philippines. (AP Photo/Bullit Marquez)

A man salvages what is left of his makeshift house as Typhoon Rammasun batters suburban Navotas, north of Manila, Philippines on Wednesday, July 16, 2014. (AP Photo/Aaron Favila)

About 300,000 people moved to safer ground from their homes in Albay and five nearby provinces threatened by flooding, landslides and storm surges, many of them haunted by memories of last year’s disaster, officials said. Haiyan’s strong winds and tsunami-like storm surges flattened towns, leaving at least 6,300 people dead and more than 1,000 missing.

Albay, about 340 kilometers (212 miles) southeast of Manila, the capital, has had its share of major disasters. Mudslides from Mayon volcano buried villages during a 2006 typhoon and left about 1,600 people dead and missing.

“I got scared because our house was being pounded by strong wind and rain. We went and got drenched in the rain,” Lucille Navarro, a 35-year-old mother of two, said by cellphone from a crowded evacuation shelter in Albay’s Daraga town, where she brought her son and daughter.

The eye of Typhoon Glenda struck Legazpi City in Bicol in the late afternoon on Tuesday. “Roofing sheets are flying off the tops of houses here … the wind is whistling,” Albay Governor Joey Salceda told ABS-CBN News.

Rammasun, the Thai term for god of thunder, is the seventh storm to batter the Philippines this year. About 20 typhoons and storm lash the archipelago on the western edge of the Pacific each year, making it one of the world’s most disaster-prone countries.