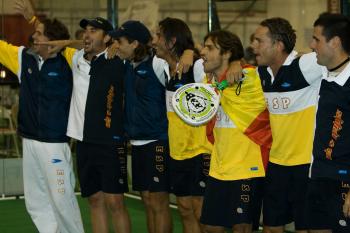 The only title the Spaniard’s didn’t take was the Women’s Match Play title, which was won handily 3–0 by Argentina’s women, whose teams were unfortunately disqualified from the Women’s Open event because of their late arrivals to Canada.

The Argentinean women ran over Maria Wakonigg and Ana Fernandez of Spain, who beat out countrywomen Patricia Llaguno and Eva Gayoso to win the Open title Friday. The Argentines dispatched them handily in a quick two-set match to open the match play championship series.

It was a reversal of results on the men’s side as the Spanish men crushed Argentina 3–0. For Spain’s top line of David Losada and Juan Jose Mieres, this was the second World Championship title that they won after they defeated Brazil’s Gerasio Del Bono and Julio Julianoti in a tough three-set match to secure the Men’s Open title.

Spain’s David Losada commented afterwards about their match against Argentina. “We were the superior team in both of our matches. We were really focused, came in really strong from the beginning, and we really wanted to win. We were really confident when we got on the court, and we ended up winning.”

Losada remarked on how significant it was to him to win the title. “Winning a World Championship is one of the best things that have ever happened in my life. It’s incredible, it’s amazing. Winning two is even bigger. I’m a professional person and this is the most important tournament, so I’m incredibly happy.”

He also explained how big of a deal the World Championship in this sport is back home where the game is much more popular in Canada, where it has been rarely heard of, and where crowds to watch the finals were scarce.

“It’s extremely important. Over 1.5 million people play in Spain, it’s a huge sport, so it’s a huge thing. We’re at the top now.”

Argentina’s Gustavo Briner commented on the match as well. “It was a really hard game. Spain played really well and we lost our opportunities to beat them. But I think it was a really good game for the public to watch, it was a very cool match.”

Briner also noted that several of Argentina’s top men’s paddle teams were missing from the event due to problems with the Paddle Tennis federations.

“The top players from Argentina live in Spain and couldn’t make it, so we had to take the top teams who still live in Argentina. There were problems with the World Paddle Federation and the Argentina Paddle Federation, problems between the two federations which prevented them from coming.”