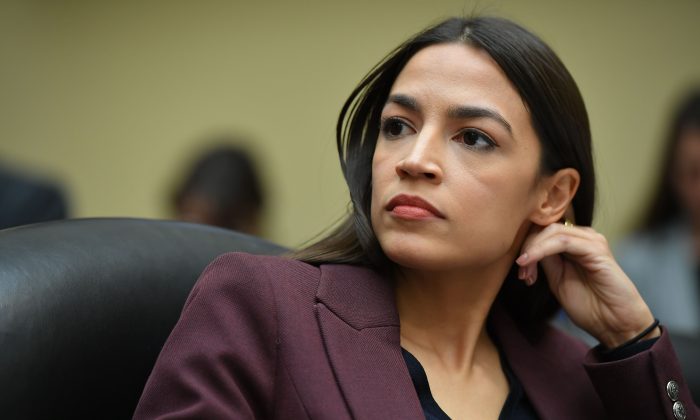 Ocasio-Cortez’s campaign also paid close to $19,000 to the LLC, according to the complaint.

“It appears that Respondents orchestrated an extensive off-the-book operation to make hundreds of thousands of dollars of expenditures in support of multiple candidates for federal office,” the complaint stated. “The relationship between the Respondents appears to be incestuous, with likelihood that they were aware, or should have been aware, of the sweeping and apparently illegal nature of the enterprise.”

PACs are required to report names and addresses of all people who paid more than $200 to “meet a candidate or committee operating expense” as well as the purpose of the payments.

But all the payments to the LLC were simply reported as “strategic consulting,” based on FEC filings reviewed by the National Legal and Policy Center, a right-leaning ethics and accountability nonprofit that filed the complaint.

“It appears ‘strategic consulting’ was a mischaracterization of a wide range of activities that should have been reported individually,” the complaint stated.

The complaint details that the LLC, called Brand New Congress, had an “apparent role … to act as a conduit for money” raised by federal candidates and the two PACs, Brand New Congress PAC and Justice Democrats PAC.

The Justice Democrats and Brand New Congress PACs didn’t respond to a request by The Epoch Times for comment.

“There is no violation,”  Ocasio-Cortez told Fox News on March 5.

The Brand New Congress PAC was founded in April 2016 by former volunteers and staff of the presidential campaign of Sen. Bernie Sanders (I-Vt.), a self-avowed democratic socialist.

The idea was “to recruit candidates who were not thinking about running already and to actually fully run all of their campaigns,” the PAC stated on one of its websites.

In early 2017, Saikat Chakrabarti, one of the PAC’s board members and former director of organizing technology for the Sanders campaign, teamed with another Sanders campaigner, Zack Exley, as well as Cenk Uygur and Kyle Kulinski from the Young Turks leftist media company, to found Justice Democrats.

Exley is a former fellow at the Open Society, run by progressive billionaire George Soros. He also consulted the presidential campaign of Barack Obama and most recently founded an organization that produced an outline of The Green New Deal (pdf)—a plan to overhaul the whole economy, including having the federal government guarantee a job for everybody, at the cost of $52 trillion to $94 trillion over 10 years, based on estimates from the American Action Forum, a center-right fiscal think tank.

The Justice Democrats weren’t just helping Ocasio-Cortez—the group created her as a candidate.

“Ocasio-Cortez was recruited to run by Justice Democrats in early 2017 and was trained at weekend ‘boot camps’ in the fundamentals of electoral campaigning and progressive policy,” the group stated in a Nov. 6 release, boasting about her victory.

The group not only raised funds for her, but also “built a phone-banking tool that allowed over 1,000 volunteers to make over 192,000 calls to over 86,000 voters for the Ocasio-Cortez campaign” and “mobilized volunteers to knock on doors, helped build Ocasio-Cortez’s digital and communications infrastructure and eventually jumped in to help staff her campaign.”

Ocasio-Cortez won her primary with less than 17,000 votes, beating the incumbent Joseph Crowley’s less than 13,000.

The group stated it ran campaigns in a similar fashion for at least nine other candidates.

Chakrabarti not only ran Brand New Congress LLC, but was also Ocasio-Cortez’s campaign manager and sat on the board of Justice Democrats, the group’s website indicated as recently as Jan. 8. He was taken off the website sometime later in January. He’s now Ocasio-Cortez’s chief of staff.

As late as July 10, 2018, two weeks after Ocasio-Cortez’s primary, the website stated that the Justice Democrat’s board only included two members—Ocasio-Cortez and Chakrabarti, who had “legal control over the entity.”

Documents filed (pdf) with the government in Washington list Ocasio-Cortez and Chakrabarti as the entity’s governors—those who control it—along with Nasim Thompson, former executive director and PAC board chair of Brand New Congress.

“If the facts as alleged are true, and a candidate had control over a PAC that was working to get that candidate elected, then that candidate is potentially in very big trouble and may have engaged in multiple violations of federal campaign finance law, including receiving excessive contributions,” former Republican FEC Commissioner Hans von Spakovsky told The Daily Caller News Foundation.

Republican election attorney Charlie Spies piled on, saying “it looks like the campaign and PAC are under common control and the PAC was funding campaign staff and activities as an alter-ego of the campaign committee, which would be a blatant abuse of the PAC rules,” the Daily Caller reported.

If the FEC concludes that the Ocasio-Cortez campaign and Justice Democrats were controlled by the same people and thus affiliated, “then anyone who contributed over $2,700 total to her campaign and the PAC would have made an excessive contribution,” former FEC Commissioner Brad Smith told the Daily Caller.

One such person would be Chakrabarti himself, who gave the allowed maximum of $5,000 to the PAC while also maxing out the $2,700 contribution limit to Ocasio-Cortez.