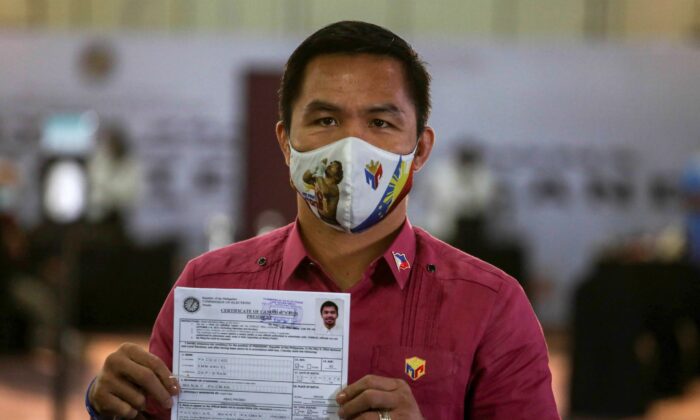 MANILA, Philippines—Newly retired boxing star Manny Pacquiao filed his certificate of candidacy for the Philippine presidency Friday as registration opened for candidates seeking to lead a Southeast Asian nation that has been hit hard by the pandemic and deep political conflicts.

Elections officials placed heavy restrictions to prevent the Oct. 1–8 registration period from drawing huge crowds of political supporters and becoming hotbeds for COVID-19 infections. Aside from the presidency and vice presidency, more than 18,000 national, local, and congressional posts will be contested in the elections on May 9, 2022.

Considered an Asian bastion of democracy, the Philippines has also seen electoral mayhem and violence. In 2009, gunmen deployed by the family of Maguindanao province’s then-governor massacred 58 people, including journalists, in an attack on an election convoy that shocked the world.

About 3,000 police officers, including some patrolling in armored police vans, were deployed around the seaside convention complex in Manila where presidential candidates were expected to register. The area was declared a no-fly and no-fishing zone.

Aspirants can bring only up to three companions, who were required to undergo COVID-19 swab tests, when registering their candidacies to prevent past chaotic scenes of candidates showing up with movie stars, musical bands, and rowdy mobs of followers.

“We really went to great extent to make sure that the filing would be sober,” Commission on Elections spokesman James Jimenez said.

Still, hundreds of fans and supporters in face masks and holding Pacquiao’s portrait and small Philippine flags lined the street leading to the heavily secured elections registration center by Manila Bay to cheer his convoy.

Many expect the race to succeed controversial President Rodrigo Duterte to be crowded and politically hostile. Pacquiao, former national police chief Panfilo Lacson, and Manila Mayor Isko Moreno have declared they will seek the presidency, and others are expected.

Pacquiao and Duterte were staunch allies until they had a well-publicized falling out this year as the elections season loomed. The two and their camps fought over control of the ruling party and Duterte threatened to campaign against Pacquiao if the boxing legend could not prove his remarks that corruption has worsened under the current administration.

“Those who take advantage of the nation, stealing, robbing the Filipino nation, your happy days of taking advantage in the government are already numbered because if the Lord places me there, I promise not only to the Filipino people, but also my promise to God, that they all will be put in prison,” Pacquiao told reporters after registering his candidacy.

The 42-year-old senator announced his retirement from boxing Wednesday after winning fans with his rags-to-riches life story and legendary career.

Duterte, 76, has accepted the ruling party’s nomination for him to run as vice president in a move that whipped up a constitutional debate and shocked opponents who have long condemned him as a human rights calamity.

Philippine presidents are constitutionally limited to a single, six-year term, and a constitutional expert has said he would question Duterte’s candidacy before the Supreme Court since a successful vice-presidential run would put him within one step of the office again.

Western governments led by the United States and human rights activists have long raised the alarm over Duterte’s police-enforced crackdown against illegal drugs that has left more than 6,000 mostly petty drug suspects dead since he took office in mid-2016. The killings are being investigated by the International Criminal Court.

Although Duterte remains popular based on opinion polls, the drug killings, along with his handling of the COVID-19 pandemic, which led to one of the worst economic recessions and widespread unemployment and hunger, are expected to be key issues in the elections.

Activists have long compared Duterte to the late dictator Ferdinand Marcos, who was ousted in a 1986 army-backed “people power” revolt that became a harbinger of change in authoritarian regimes worldwide. A son and namesake of Marcos, former senator Ferdinand “Bongbong” Marcos Jr., is expected to contest the presidency and has received good support in independent opinion polls.

“The stakes are high for Philippine democracy,” Manila-based analyst Julio Teehankee said, adding the candidate who can provide a clear and workable roadmap to navigate the country out of the pandemic and economic shocks would have a crucial edge.

The Philippines has reported more than 2.5 million COVID-19 cases, with 38,164 deaths in the second-worst pandemic tolls in Southeast Asia after Indonesia.

By Aaron Favila and Joeal Calupitan