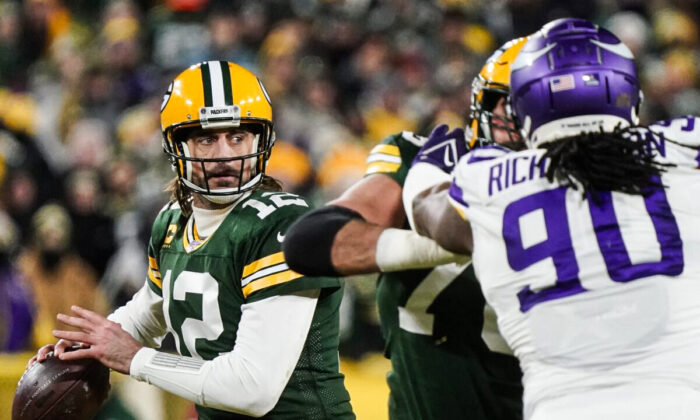 Green Bay Packers' Aaron Rodgers thorws during the first half of an NFL football game against the Minnesota Vikings in Green Bay, Wis., on Jan. 2, 2022. (Morry Gash/AP Photo)
NFL

GREEN BAY, Wis.—Aaron Rodgers and the Green Bay Packers once again have made sure they won’t have to leave Lambeau Field for the conference playoffs.

They’re hoping it works out better for them this time.

Rodgers threw two touchdown passes, A.J. Dillon ran for two more scores and the Packers routed the Minnesota Vikings 37–10 on Sunday night to wrap up the NFC’s No. 1 playoff seed.

“It definitely feels amazing,” Dillon said. “It’s something we’re continuously working toward, we’re striving toward, to get that. We know how important it is to have teams come through Lambeau.”

Green Bay (13–3) is the lone NFL team with an unbeaten home record and has a chance to reach the Super Bowl without leaving Lambeau Field. Sunday night’s game exemplified the potential advantage the Packers have playing home games in January, as the temperature was 11 degrees with a wind chill of 1 just before kickoff.

“Last year we didn’t get that good Green Bay weather,” Rodgers said. “Tonight was one of those nights. We haven’t had a game like this in a while temperature-wise. This was different. It is different, the whole feel of it. I feel like teams can break a little bit easier when it is this cold because there’s an excuse—the weather.”

Green Bay’s victory, coupled with Philadelphia’s 20–16 triumph at Washington earlier in the day, dropped the Vikings (7–9) from postseason contention and gave the Eagles a playoff berth. The Vikings were playing without quarterback Kirk Cousins after he was placed on the reserve/COVID-19 list Friday.

“Disappointing tonight,” Vikings coach Mike Zimmer said. “I didn’t feel like we gave ourselves a chance to win.”

Adams has 117 receptions to break the Packers’ season record he set last year.

Over his last six games, Rodgers has thrown 18 touchdown passes without an interception despite playing with an injured left pinky toe.

Minnesota had won its last two matchups with the Packers but never had much of a chance in this one without Cousins, who had thrown for 341 yards and three touchdowns in a 34-31 home victory over the Packers on Nov. 21.

The Packers have won five straight since that loss in Minnesota.

Sean Mannion started in place of Cousins and went 22 of 35 for 189 yards, including a 14-yard touchdown pass to K.J. Osborn. Mannion was making his third career start, and first since the final week of the 2019 regular season.

“I feel like Cousins gets the ball out a little bit faster than the quarterback that played today,” Packers outside linebacker Rashan Gary said. “We just came to work as a defense and got the outlook that we wanted.”

The Packers reached the red zone on three of their first four possessions but only had a 6–0 lead to show for it, thanks to Mason Crosby’s two field goals. But they broke through by reaching the end zone on their next three possessions, including two touchdowns in the final 4.5 minutes of the first half.

“Give them credit,” Zimmer said. “They’re a good team and they got after us tonight.”