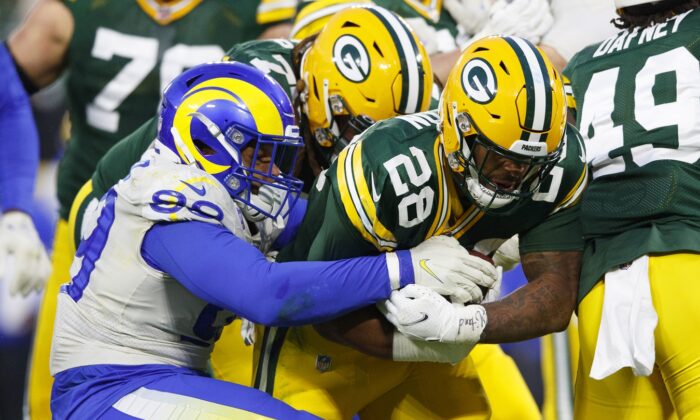 Packers Improve to 9–3 With Win Over Rams

Aaron Rodgers threw for 307 yards and two touchdowns as the Green Bay Packers solidified their spot near the top of the NFC standings with a 36–28 victory Sunday over the visiting Los Angeles Rams.

Davante Adams had eight receptions for 104 yards as the Packers (9–3) turned three Rams turnovers into 17 points and took control on Rasul Douglas’ 33-yard interception return for a touchdown to take a 36–17 lead late in the third quarter.

Rodgers was 28-of-45 passing while playing for the second consecutive game with a fractured toe as the Packers moved a half-game behind the Arizona Cardinals in the battle for first place in the NFC. Teammate AJ Dillon had 69 yards rushing on 20 carries.

Rams quarterback Matthew Stafford was 21-of-38 for 302 yards and three touchdowns, while throwing an interception that was returned for a touchdown for the third consecutive game, all defeats for Los Angeles (7–4).

Odell Beckham Jr. had a 54-yard touchdown catch in the fourth quarter while playing his second game since joining the Rams after he was waived by the Cleveland Browns.

Leading 20–17 at halftime, the Packers got a 5-yard TD reception from AJ Dillon and a 29-yard field goal from Mason Crosby for a 30–17 lead after a lost fumble by Rams punt returner J.J. Koski. Douglas’s interception return made it a three-score game with more than a quarter remaining.

The Rams nearly buried themselves in the first quarter. The Packers took a 7–0 lead on a 1-yard run by Rodgers after Green Bay took over on the Rams’ 6-yard line when Green Bay’s Rashan Gary forced Stafford to fumble.

On their next possession, the Rams tried to convert on fourth down, only to give the Packers the ball back at the 29-yard line. Crosby made it 10–0 on a 45-yard field goal with 13:29 remaining in the half.

The Rams got their offense on track when Stafford hit Van Jefferson on a 79-yard touchdown pass with 12:42 remaining in the half before a 28-yard field goal from Crosby put Green Bay up 13–7.

Randall Cobb’s 7-yard TD reception put Green Bay ahead 20–10 with 4:21 to go before halftime. Less than three minutes later, the Rams made it 20–17 on a 6-yard TD pass from Stafford to Darrell Henderson.

Cobb, who had four catches for 95 yards, did not return after halftime because of a groin injury.