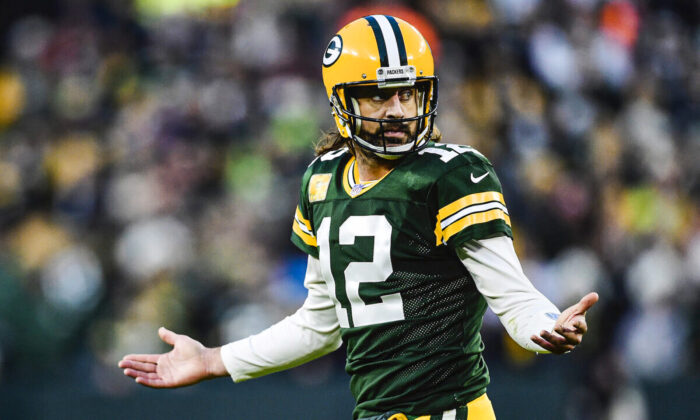 Aaron Rodgers #12 of the Green Bay Packers reacts after throwing an incomplete pass on third down during the first half against the Seattle Seahawks at Lambeau Field, Green Bay, Wisconsin on Nov.14, 2021. (Patrick McDermott/Getty Images)
US News

Green Bay Packers quarterback Aaron Rodgers says he expects an apology from the Wall Street Journal (WSJ) for an article stating he has “COVID Toe,” although he referenced the condition in an interview a day earlier.

Speaking to reporters on Wednesday, Rodgers said he had a fractured toe and said the WSJ’s report is “a classic case of disinformation.”

“I have a fractured toe, I’d never heard of COVID toe before, I have no lesions on my feet, it’s just a classic case of disinformation,” he said. “It’s surprising coming from what used to be a reputable journalistic institution but that’s the world we live in these days.”

He said he did “get a kick out of reading that article. That was very, very interesting, but no I had never heard of COVID toe before.”

“Pat made a joke about it on the show, and I mentioned yesterday that it’s worse than a turf toe and it must be a bone issue,” Rodgers explained, referring to his appearance on “The Pat McAfee Show” on Tuesday.

During that interview, he remarked that he “didn’t have any lingering effects” from his COVID-19 infection “other than COVID toe,” later adding that his toe injury is a “bone issue.”

According to ESPN, he later said that he has a fractured toe.

“That’s actually called disinformation when you perpetuate false information about an individual,” Rodgers said, taking off his shoes to show the camera his toes.

“Oh, there’s no lesions whatsoever. Oh, what a surprise,” he said.

The Epoch Times has reached out to the Wall Street Journal for comment.

The condition, dubbed “COVID toes” can cause the skin on one or more of your toes to swell up and look bright red, and then purple, according to WebMD. Other symptoms include blisters, itching, pain, raised, painful bumps, and areas of rough skin.

Rodgers previously made headlines when he was fined by the NFL for COVID-19 protocol violations.

The probe came after Rodgers, 37, tested positive for COVID-19, the disease caused by the CCP (Chinese Communist Party) virus in early November, after claiming in August that he was “immunized” against the virus.

The NFL found in its investigation, which included video review, that both Rodgers and teammate Allen Lazard failed to consistently wear face masks inside the team’s facilities, and attended a Halloween party maskless—violating protocol that requires masks for players not vaccinated against COVID-19.