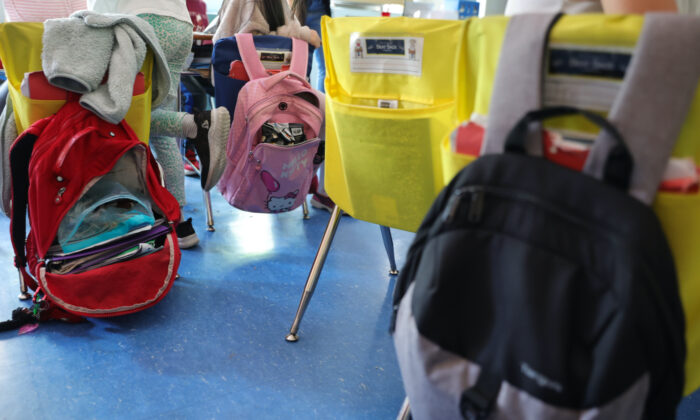 PA Education Administrator and Lawmaker: ‘Gender Education Is Responsibility of Family, Not School’

Controversy over the Pennsylvania Department of Education’s (PDE) promotion of gender identity theory on its official website is festering.

Some education administrators and state legislators believe gender education belongs in the home and should not be taught in schools.

“I don’t believe there’s any place in the schools for this teaching. It’s not related to the standards we have right now,” Pa. State Rep. Barbara Gleim told The Epoch Times on Aug. 29.

Gleim is one of 21 in the Pa. House of Representatives calling on the Pennsylvania education secretary to resign unless he takes immediate action to reverse the new content requirements and guidelines set forth by the PDE.

She said that gender education instruction can create significant confusion for students.

Children are very impressionable at an early age and tend to believe whatever teachers are teaching them, Gleim said, but then they go home and realize that this goes against the religious and family values of the parents in the home. “And so, that’s where you’re getting this clash,” she said.

In response to the PDE’s website indicating that the two-gender concept is faulty, Gleim stated, “Pennsylvania went a step further” and in fact, in her opinion, went too far.

“They have their teachings in the home. But then, the school starts teaching that those worldviews in their homes are wrong. That’s where they’ve crossed the line. This is a secular worldview they are espousing on their department’s website that most people do not believe, nor do they teach it in their homes. They can’t teach that these other worldviews and faith-based religions are wrong.”

Gleim said that a group of parents filed a lawsuit in federal court the week of Aug. 26. “They’re even going that next step because there’s a due process clause under the 14th amendment, basically saying that the Constitution protects the sanctity of the family. And they’re saying that this is interfering with the family institution.”

Gleim said most parents she has spoken to support that type of lawsuit, and they want the schools to start concentrating on the learning gap.

“After COVID, they want schools to start concentrating on math and reading and the basics rather than trying to teach either sex education or some ideology, and [this is true for] the elementary and middle schools in particular,” she said.

“A lot of my colleagues and I believe that parents have the right to know what their student or their child is being taught in school,” Gleim stated. She noted that she and her colleagues would continue to take action to support students and their families.

Gleim introduced House Bill 2521 in April and it was referred to the education committee that same month.

The bill would establish an “anti-indoctrination pedagogy” to prevent teachers or other school district employees from forcing students to adopt or adhere to beliefs that violate the Civil Rights Act; particularly those involving inequality or unequal treatment based on race, sexual orientation, gender identity, religion, disability, age or family status.

Gleim said the bill she is working on for the fall is very moderate and transparent so that everybody’s eyes are open, and they all understand the parent’s complaint.

“All it does is it says to a parent if you have [concrete] proof that there is some indoctrination being taught in your classroom, bring it to the school board, the school board then is mandated to go through an investigatory process with that documentation, just like the bullying policy that they already have,” she said.

“So, it calls on the administration, the teacher, and the parents to meet in the school board to talk about what is being taught in that classroom.”

“Gender-identity concepts have nothing to do with academics and have no place in the classroom. Gender issues are something that should be managed and handled in the family home; it is a private matter,” Veronica Gemma told The Epoch Times on Aug. 26.

Gemma is a former school board director of the Central York School district and is now the education chair for PA Economic Growth PAC, and the local chapter chair for No Left Turn in Education for South Central York County, Pa.

Gemma stated that the PDE is forcing teachers to promote pronoun usage in the classroom via questionnaires and surveys.

She said some students leave such paperwork blank; others reject it with reason, but many go with it because they are young and timid and don’t know what else to do. If the pronouns are not welcomed, it causes stress and division in the school for teachers and students.

It’s also a violation of free speech, she added.

“Children come to school with their family’s values [that] they are taught at home.  All families are different, and we should celebrate that, but values and beliefs should be respected,” she said.

Gemma questioned that gender theory could confuse children at innocent, young impressionable ages, which will lead to the changing of the foundation of the country. “The PDE guidance is faulty and divisive for the young minds at a time when they are still learning their colors, to read, count, and play together. Yes, this is [in] K-3 without parental knowledge or consent,” she said.

She believes the gender issue is a biological attribute instead of a state of mind. “For two years, our world was told to follow the science,” she said referring to the pandemic. “This is basic biology and should be treated as such,” Gemma said on gender.

“We are born, male and female, in God’s Image. Therefore, God’s design cannot be changed. It is a blatant lie circulating in society. None of it makes sense,” she said.

“CRT in a nutshell teaches all are inherently racist; we have oppressors and the oppressed forcing a generation of children to adopt a one-sided liberal belief system,” she said.

Public school systems are presenting SEL as a curriculum that will improve academic achievement and positive social interactions. Still, it is decreasing healthy self-image due to guilt and victimhood it instills, reducing healthy relationships, and creating the divisions it says it avoids, she said.

“Social emotional learning categorizes every student as ‘at-risk”’ of needing behavioral intervention. However, parents can opt out at their school by requesting the opt-out form,” she said.

Gemma supports the idea that the instruction of values and morals should be left to families and that schools need to get back to basics providing a sound, and comprehensive academic focused on reading, math, correct history, and science, not social justice agendas that confuse and prevent effective well-rounded learning.

“We have a serious reading deficit in our schools,” she said.

“By the time a child hits 3rd grade, and if they are not reading at level, they will never catch up. I have teachers coming to me, telling me that at the 6th-grade level, less than 60 percent of students are at reading level, and labeled below basic. The 2022 graduating class, sadly, 30 percent of students not reading at an HS level. This is what schools need to be focused on, not social justice,” said Gemma.

According to a recent poll by Education Next, an education policy publication, nearly 2 million students in the United States have been pulled out of government schools. The poll indicated that between 2020 and 2022, the number of students in public schools dropped by 4 percent. “This will increase in coming months and school years if the Dept of Ed continues this nonsense,” said Gemma.

When the PDE guidance came out, parents were outraged. “We saw an increase in school board meeting attendance, letters being written to school boards speaking out against this, requests for copies of the exact curriculum and lesson plans for their student’s classroom,” she said.

Gemma said due to parents learning what is happening in classrooms there’s a mass exodus from the public school system.

She stated that for years, school administrations created a separation between teachers and parents, making it more difficult for parents to contact teachers when issues arise. Parents have been blindsided when suddenly their child comes home in the middle of transitioning their gender, which started at school, leaving parents in the dark. Schools allow children to change their names, clothes, and gender without involving their parents. Then parents are told their child will commit suicide if they do not support the transition.

She believes children deserve a world-class education, something the country once had for over a century, and parents deserve complete transparency into what their children are learning without fear of indoctrination or exposure to faulty and unproven liberal concepts that are dangerous and divisive.

Gemma stated parents need to be informed and know their rights, and the website Courage is a Habit is a great resource to keep parents informed.