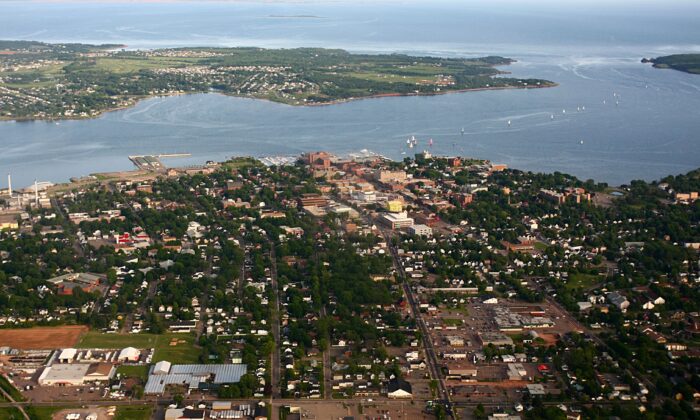 An aerial view of Charlottetown in a file photo. (Martin Cathrae/en.wikipedia.org/wiki/Creative_Commons)
Canada

P.E.I. Residents Can Hug Moms on Mother’s Day, Thanks to Eased COVID-19 Rules

CHARLOTTETOWN—When Cheryl Roberts’ five-year-old daughter learned Friday that she could finally hug her grandparents again, she turned to her mom and said, “This is the best day of my life.”

On Friday, Prince Edward Island’s chief health officer, Dr. Heather Morrison, announced some COVID-19 physical distancing restrictions would be lifted, including that gatherings of up to five people are now permitted indoors. As an added treat for Mother’s Day weekend, Morrison said Islanders are now allowed physical contact—including hugs—with one or two people.

Roberts, who lives in Statford, felt such a surge of emotion at the news, describing it as the “greatest feeling in the world.”

“I started to cry, my kids were screaming and yelling and running around the house, they were so excited,” she said.

“I’ve just tried so hard over the past few months to be so strong for them, and to not be upset, because my kids have had a really tough time with it. So it was very overwhelming.”

Roberts’ family, like many of those in the deeply connected Island province, is close-knit, and pandemic restrictions that have forced them to stay apart have taken a deep emotional toll on everyone, she said.

The province did recently ease restrictions to allow up to five people to gather together outdoors while keeping six feet of distance between each person, thanks to P.E.I.’s low number of COVID-19 cases and ongoing lack of community spread of the virus.

In advance of Mother’s Day, Roberts had been planning a visit with her mother following these guidelines. But with snow and rain in the forecast, their plans meant she and her children would’ve had to stay their vehicles, huddled in blankets, trying to have a Mother’s Day visit outside in a snowstorm.

Now, Roberts can visit her mother in comfort at her home on Mother’s Day and her children can hug their “Nanny and Poppy.”

Jillian Trainor, a journalist who lives in the Western P.E.I. town of Alberton, lives alone and has only had the companionship of her two cats through the six-odd weeks that have passed since Canadians began limiting travel outside the home to essential trips.

Going this long without any physical contact with another person has had a more profound impact than she could have anticipated, Trainor said.

“You don’t realize how much you touch people in a day until you can’t,” she said.

“It’s been six weeks since I’ve been able to hug my family and I’m really starting to feel it now, because when I visit my family _ my grandfather and my aunt _ I’d give my aunt a hug before I left and I’d give Grampie a pat on the shoulder and a kiss on the cheek and I haven’t been able to do that.”

Trainor said getting that hug from her family was the first thing she thought of when she heard of the new lift in pandemic restrictions Friday. Her voice trembled with emotion just describing the feeling.

“I’m really looking forward to that.”

Savannah Belsher-MacLean of Pinette was also filled with emotion when she realized she would be able to hug her mother again, especially with Mother’s Day on the horizon.

She was on a video conference call for work when someone came into the call late and shared the good news.

“It was all I could do to not cry when we were on the call because I was just thinking about Mother’s Day coming up this weekend and just being able to hug my mom,” she said.

“It’s been so hard to not hug my mom, and I’m not a super huggy person. I don’t feel like I need a lot of touch in the run of my day, but I’ve really noticed it. It was such a overwhelming feeling.”

Sometimes when she shares hugs with her father, Belsher-MacLean says she and her sisters often do a little wiggle while they embrace, as if they are wagging their tails with happiness.

“I’m missing one of those hugs right now, a little tail-wagging hug.”

While she is looking forward to more contact with her parents and friends as P.E.I. prepares to ease more restrictions in the coming weeks, Belsher-MacLean says she is also mindful that many Canadians across the country will not have the luxury of visiting or hugging their mothers this weekend.

That’s why she says she feels so lucky to live in P.E.I. _ one of the few places in Canada that has been something of a haven from the pandemic.

As of Friday, all 27 cases of COVID-19 that have presented on the Island were considered recovered. No one who has contracted the virus in P.E.I. has been hospitalized and there have been no deaths from the illness.

“I just feel grateful to be here in this little safe place in the country,” Belsher-MacLean said.