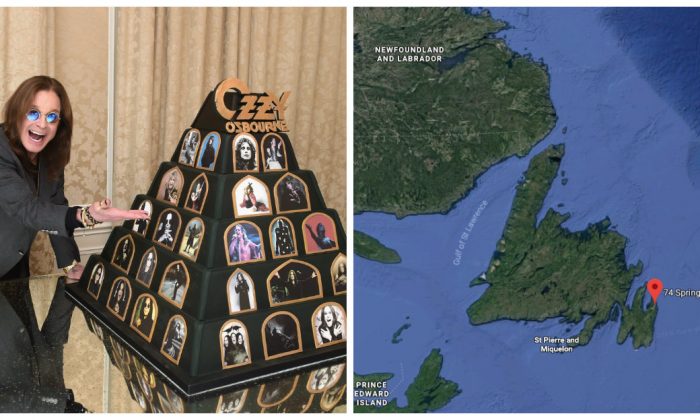 A pizza delivery driver who had fallen on hard times got an unexpected present from one of his rock heroes after having his car and most of its contents stolen.

Josh Cook lives in a small house in St. John’s, Newfoundland, caring for and supporting his disabled mother. About a year ago, his car was stolen while he was out delivering a pizza. The neighborhood in downtown St. John’s where it was stolen is notorious for crime and the location of the delivery—74 Springdale St.—has had 112 calls to police in the last three years, according to the CBC.

Cook’s car was returned later that weekend to the same spot it was stolen from, but it was irreparably damaged—and his cherished collection of hard rock and metal albums was gone. The only thing left was a CD by Zakk Wylde,  best known as the guitarist for Ozzy Osbourne and founder of the heavy metal band Black Label Society.

To add insult to injury, Cook lost his job because his old insurance company cancelled his policy saying he was “high risk,” and his new one made him sign a waiver stipulating he wouldn’t deliver pizza anymore.

His hard-luck story was covered by CBC and other media, and soon after that a surprising act of kindness came his way.

Zakk Wylde’s son heard of the theft through blogs and a rock music magazine, according to the Canadian Press. Wylde’s son contacted Cook for his address. The goodies arrived a week later.

Cook got two packages of Ozzy Osbourne merchandise including T-shirts, sweatshirts, and Black Sabbath and Ozzy CDs—“basically everything Ozzy did,” Cook said—and an autographed picture of the heavy metal legend himself.

“They didn’t have to do anything like that. It was incredible. These guys are set for life but still take the time for one fan,” he told the Canadian Press.

Osbourne, 69, came from humble beginnings himself in Birmingham, England. The rock icon battled drug and alcohol addiction for years. He became most well known for fronting Black Sabbath in the ’70s before embarking on a very successful solo career. His family, profiled on MTV in “The Osbournes,” spurred the surge in reality television in the early 2000s.

The “Prince of Darkness” is celebrating 50 years of his music with his “No More Tours 2” world tour, although he insists he is not retiring.