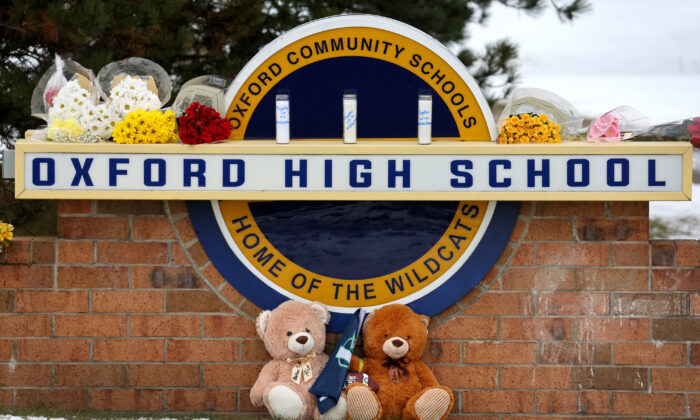 Stuffed bears and flowers are gathered at a makeshift memorial outside of Oxford High School in Oxford, Mich., on Dec. 1, 2021. (Scott Olson/Getty Images)
US News

Around 20 students at a Michigan high school where four students were killed in a mass shooting last year have filed a lawsuit against the school district saying their constitutional rights to safety and education were violated.

The law firm representing the students announced the lawsuit on Friday. It names the Oxford Community School District, its former superintendent, and other officials, The Associated Press reported.

The lawsuit demands the school district implement a “fully transparent and independent third-party investigation of the actions and events leading up to the shooting” and what it calls an end to the “practice of concealing and minimizing threats of violence,” according to The Associated Press.

Other lawsuits following the shooting have argued the violence could have been prevented.

On Nov. 30, 2021, Ethan Crumbley, who was 15 at the time, allegedly killed four students at Oxford High School, 30 miles north of Detroit. Six in total were shot, including a teacher.

He faces trial in November, charged with murder and terrorism. His lawyers said they will pursue an insanity defense.

His parents are also charged with involuntary manslaughter for providing him with a gun as a gift. They are also accused of breaching their responsibility by refusing to remove Crumbley from the school two hours before the shooting.

On the morning of the shooting, school staff had called James and Jennifer Crumbley to the school and confronted them with distressing drawings done by their son depicting shootings and the words: “The thoughts won’t stop. Help me.”

Authorities said the incident warranted searching his backpack, which didn’t happen. A prosecutor at the time indicated they hadn’t “ruled out” bringing charges against the school.

The Crumbleys have also been accused of ignoring warning signs about their son, including his fascination with Nazi propaganda and text messages in 2021 in which he told his mother that he thought “there was a demon or a ghost or someone else inside the home.”

There were also rumors of threats and threatening behavior in the weeks leading up to the shooting that parents say were ignored by school officials, The Associated Press reported.

Alicia Feltz, whose daughter will be a sophomore at the high school this fall, said the school “desensitized and diminished the threats that walked alongside our children in the hallways.”

“None of us want to be here right now,” Feltz added. “We have kindly and firmly asked for change and now we’re demanding it.”

The latest lawsuit also asks the district to stop returning students to class when they pose a risk of harm to themselves or others.

Crumbley and his parents are being held in the same jail.

This is the latest in a number of lawsuits against the school, many of which allege gross negligence and violation of the Michigan Child Protection Law.