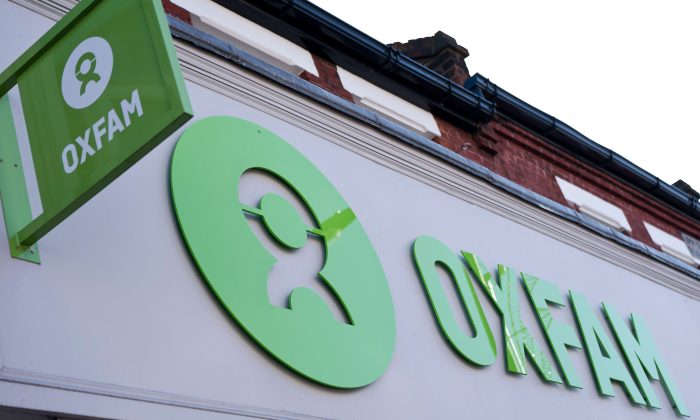 'Oxfam' signage is pictured outside a high street branch of an Oxfam charity shop in south London on February 17, 2018. JUSTIN TALLIS/AFP/Getty Images
Viewpoints

It tells a sad, familiar story: Thousands of poor people die around the world every year “because they cannot access health care;” over a quarter-billion children don’t attend school; and in the good news/bad news department, while a record-low percentage of the world’s population are severely poor—living below the World Bank-established threshold of $1.90 per day—half of humanity (3.4 billion people) still lives on less than $5.50 per day.

For me, Oxfam’s report is sad for another reason besides its grim content: It frames the issue in a counterproductive and misleading way. The very title of the report, “Public Good or Private Wealth,” is fallacious. It presents an either/or choice when, in fact, the public good is most advanced in societies that are based on private property and wealth.

The report’s premise is egregiously flawed. It suggests throughout that the reason the poor are poor is because the rich are too rich. That’s the import of statements such as “Last year, 26 people owned the same wealth as the 3.8 billion people who make up the poorest half of humanity, down from 43 people the year before.” This statistic may be true, but it is irrelevant to the solution for poverty. This implies that it isn’t fair for a few to be so wealthy when so many are so poor. Let’s examine this fallacy.

In market economies, large fortunes accrue to those who supply the wants of millions of consumers. Billions in profits are the mirror image of having created billions in value that enhances the lifestyle of masses of people, the vast majority of whom are not rich. The reason there are still countries with severe widespread poverty isn’t that there are rich and super-rich people in affluent countries, but because there aren’t enough rich and super-rich people producing more wealth for more people in poor countries.

It’s only in the poor countries where the only ones close to billionaire status are kleptocratic rulers and their allies, who loot their compatriots and stash the loot in Swiss bank accounts.

Oxfam has a very jaundiced view of “the rich.” Their annual report cites The World Inequality Report 2018: “… between 1980 and 2016, the poorest 50 percent of humanity only captured 12 cents in every dollar of global income growth. By contrast, the top 1 percent captured 27 cents of every dollar.”

“Captured?” No, free market exchanges don’t involve “capturing” wealth. Wealth isn’t seized from another, but earned by producing and providing wealth for others. Voluntary exchanges are of reciprocal benefit, and those who provide the most wealth to the most people generate the most profits and become “the rich.” Why despise the rich for enriching the lives of millions of people who aren’t rich? The rich are benefactors enriching society, not leeches impoverishing it.

Oxfam, sadly, is afflicted with a severe anti-capitalist bias, essentially blaming capitalism for poverty when, in fact, capitalism is the greatest known cure for poverty. Oxfam scorns the very institution—private property—that constitutes the foundation of the market-based economies that have brought prosperity to the masses.

In a statement, Oxfam International’s Executive Director Winnie Byanyima asserted, “Governments must now deliver real change by ensuring corporations and wealthy individuals pay their fair share of tax and investing this money in free healthcare and education that meets the needs of everyone. … Governments can build a brighter future for everyone—not just a privileged few.”

There are two fundamental problems with this prescription: the insistence that forcible redistribution of wealth is the way to cure poverty, and the overestimation of government competence evinced in the statement, “Governments can build a brighter future for everyone.”

Let’s take on the second of those errors first. No, governments cannot build a brighter future for everyone. This is the false promise of socialism. If socialism really worked, the whole world would have embraced it by now. Heaven knows, it has been tried often enough, but wherever it has been implemented, socialism has leveled wealth down, not up.

By rejecting the principle of private property and confiscating the wealth of “the rich,” socialism doesn’t deliver on the chimerical promise of “social justice.” It does, however, always manage to kill the goose that lays the golden eggs of widespread prosperity.

The other error in Byanyima’s statement is the discredited notion that the key to economic development is for governments to uplift the poor with wealth redistributed from the wealthy. Fact: No developed country has ever grown into prosperity through foreign aid. Foreign trade and investments of foreign capital have been the engines of economic development, and those are activities predicated on private property and market-based decisions.

Asian fishing villages that consisted of poor, ramshackle dwellings and primitive workplaces at the close of World War II have transformed themselves into gleaming modern metropolises consisting of majestic skyscrapers and stunning affluence in only three generations. How? Not by aid, but by trade and investment.

Oxfam is doing important work. I wish them well as they minister to those in need. I just hope they can shed their ideological blinders and their collectivist, anti-capitalist biases. When the people who run Oxfam can get to the point where their compassion for the poor exceeds their resentment of the rich, then they should see clearly enough to reject the false cure of wealth redistribution.

As counterintuitive as it must seem to them, Oxfam needs to replace its hostility toward free-market capitalism for one simple pragmatic, utilitarian reason: Capitalism works. It’s the best hope that the world’s poorest people have of rising out of poverty. It is a colossal tragedy that some of those who claim to want to uplift the poor are hell-bent on denying them the means to actually escape poverty.