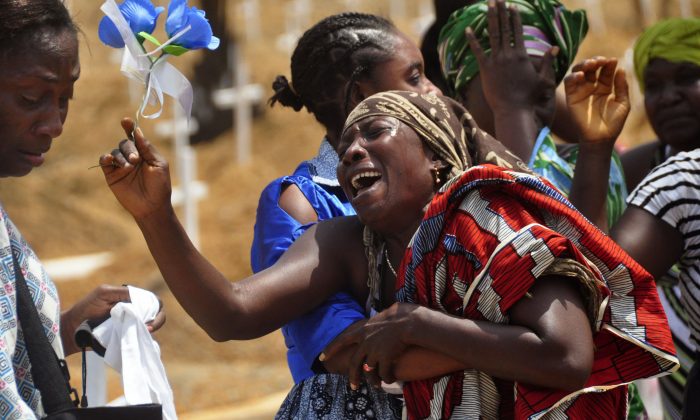 In this Wednesday March 11, 2015 file photo, relatives weep as they bury a loved one suspected of dying from the Ebola virus at a new graveyard on the outskirts of Monrovia, Liberia. Activists say international donors have failed to deliver promised funds to help West African countries recover from the Ebola epidemic that killed more than 11,000 people. Oxfam said Sunday, Jan. 31, 2016, that $1.9 billion has not been delivered. (AP Photo/Abbas Dulleh, File)
Africa

Oxfam: $1.9B in Ebola Aid Not Delivered by Donors

The remaining $3.9 billion pledged has been difficult to track because of “scant information” and a lack of transparency, the group said.

“We’re finding it hard to understand which donors have given what money, to whom and for what purpose,” said Aboubacry Tall, Oxfam’s regional director for West Africa.

Oxfam called on donors and the governments of Sierra Leone, Liberia and Guinea — the three hardest-hit countries — to provide detailed information on how aid is being provided.

More than $5 billion was pledged by the international community as part of a special International Ebola Recovery Conference in New York last July. At least $1.9 billion of that “still has not been allocated to a specific country in a pledge statement let alone through more firm commitments to specific recovery programs.”

Originating in Guinea more than two years ago, the Ebola outbreak left some 23,000 children without at least one of their parents or caregivers, while some 17,000 survivors are trying to resume their lives despite battling mysterious, lingering side effects.

The international community already has been criticized for how it handled the crisis. An Associated Press investigation found the World Health Organization delayed declaring an international emergency for political and economic reasons. Emails, documents and interviews obtained by the AP show the World Health Organization and other responders failed to organize a strong response. None of the senior leaders involved in directing the Ebola response has been disciplined or fired.

WHO Declares End to Ebola Epidemic After 11,300 Deaths

Meanwhile, the disease has not been stamped out entirely. Though the WHO declared an end to virus transmission throughout the region on Jan. 14, the next day officials in Sierra Leone reported a new fatality and a second person has since tested positive.

Sierra Leone Has 2nd Ebola Case After Epidemic Thought Over

WHO said it had anticipated there would still be flare-ups before Ebola was truly over. However, Oxfam said the slow response to recent flare-ups in both Sierra Leone and Liberia show they are still not able to deal effectively with new cases.