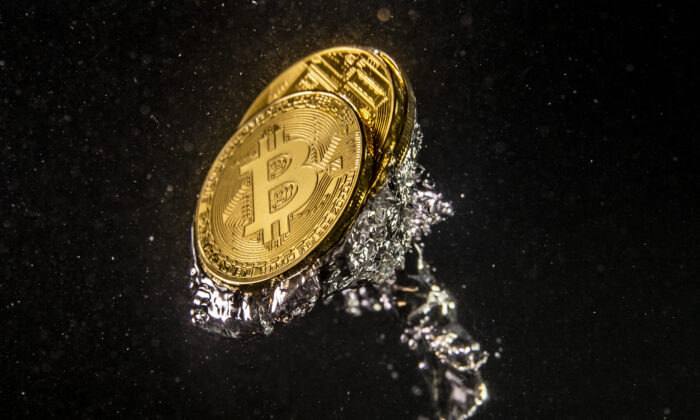 In this photo illustration a visual representation of the digital currency Bitcoin sinks into water in London, England, on Aug. 15, 2018. (Dan Kitwood/Getty Images)
Crime and Incidents

Rossen G. Iossifov was sentenced to 121 months in prison on Tuesday for his involvement in a multi-million dollar scheme to defraud American victims. He must serve 85 percent of his sentence in prison, according to federal law.

“According to the evidence at trial, Iossifov knowingly and intentionally engaged in business practices designed to both assist fraudsters in laundering the proceeds of their fraud and to shield himself from criminal liability,” said the Department of Justice (DOJ) in a statement on Tuesday.

Iossifov was convicted in a two-week trial in Frankfort, Kentucky, in September 2020.

According to court documents and evidence, the Romania-based Iossifov posted false advertisements for high-cost goods (mostly vehicles) that did not actually exist, to popular online auction and sales websites—such as craigslist and eBay.

Iossifov and his co-conspirators’ online auction fraud, according to court documents and evidence, has victimized at least 900 Americans.

Court documents and evidence showed that Iossifov designed his business for members of the Alexandria Online Auction Fraud Network (AOAF), exchanging money at more favorable rates with no identification or documentation of the source of funds required.

In a period of fewer than 3 years, Iossifov laundered nearly $5 million in cryptocurrency through four of the five scammers, and cost victims $7 million. Iossifov made at least $184,000 in proceeds.