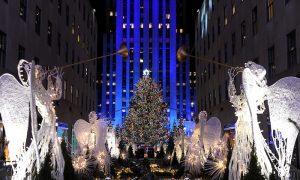 Holidays in New York City: A Guide to What to See and Do
0
Share Now
TelegramFacebookTweetEmailTellMeWeReddit
Copy Link

The body of a New York comedy club owner and his nanny were found dead in his New Jersey home on Aug. 3, according to news reports.

Kimowitz, a father of two young girls, is an owner of The Stand Comedy Club in New York City in Union Square, according to the New York Post. The venue has featured comedians Tracy Morgan, Dave Chappelle, Damon Wayans, and more.

Police were called to a home on Walton Road in Maplewood at around 6 a.m. after a jogger saw a woman being attacked on the front lawn.

According to the Post, Bermudez-Rodriguez was found in the street with stab wounds, and she also appeared to have attempted to run from her assailant.

Officials said she was taken to Beth Israel Medical Center and later died.

Kimowitz was found unresponsive inside the home. He was pronounced dead at the said, according to the Essex County Prosecutor’s Office in the Post’s report.

Police responding to calls of a woman being assaulted found Karen Bermudez-Rodriguez lying on the street around 6 a.m. David Kimowitz was found unconscious inside the house.https://t.co/eCBVxb0IgF

Neighbors of the family said the daughters were seen playing outside with Bermudez-Rodriguez, the New York Times reported.

“They have a little balcony that they would be playing out there with their kids,” Andrew De la Torre told the Times. “They’d have family friends over. Really nice people.”

He will truly be missed. pic.twitter.com/KbQw9lu6am

One neighbor told that Post that Porter was known to visit the nanny outside in his car near the house.

Said one, “A couple of people are saying they saw him pacing up and down the street the day before. He was doing the same thing last week. A couple of the nannies were having a party the night before it happened and he was lurking in the wood off to the right.”

On social media, Kimowitz was mourned.

This is such shocking news. A great guy and friend has passed this weekend. Just talked with him last week and Fri night. He seemed so happy, a wife, 2 kids, his new club opened. And now this horrific new. David Kimowitz you will be missed. RIP

This is absolutely devestating news. David Kimowitz was always such a joy to be around. I’m so saddened by this. My heart goes out to his family. 💔 https://t.co/V5M7d0Ui4C

A LinkedIn page for Kimowitz stated that he received a bachelor’s degree in history from New York’s Columbia University in 2002 and was involved in several comedy ventures.

Other details about the case were not disclosed.