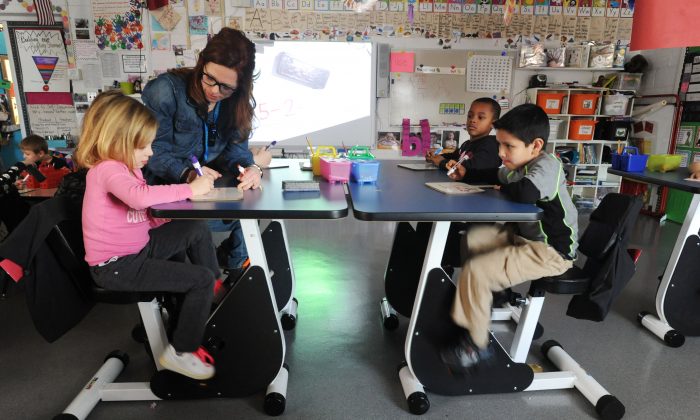 In this photo taken on Tuesday, Jan. 19, 2016, Estes Elementary School kindergarten students Evelyn Bolmer, 5, front left, Jase Bellamy, 6, back right, and Eric Guarneros, 6, front right, listen as their teacher Faith Harralson assists Bolmer with a math equation as they ride pedal desks in Owensboro, Ky. Harralson won a $12,000 grant from the school system to install the desks in her classroom. (Jenny Sevcik /The Messenger-Inquirer via AP)
US

OWENSBORO, Ky.—Remember those classrooms with desks — like the ones in “A Christmas Story” — all lined up in rows.

At Estes Elementary School, kindergarten teacher Faith Harralson won a $12,000 grant from the school system to install “pedal desks” in her classroom.

The top looks like a traditional desk. But there are bicycle pedals down where the students’ feet are.

Students can pedal while they work.

Harralson said the pedal desks allow the students to move more, which she said is good for the mind and body “because it activates cells in the brain.”

It also helps when kindergartners get tired of sitting still.

Harralson said, “I’ve seen a shift in my students’ behavior and engagement since the bikes arrived. Thanks to good engineering, the pedals are essentially noiseless and don’t interfere with instruction or activities.”

The desks were purchased from KIDSFIT Youth Fitness.

The desks are higher and more comfortable for students who want to stand while they work.

“The desks make it more flexible to provide individual attention because the desks move,” Davis said.

Although they’re called standing desks, they come with stools, giving students an option of standing or sitting.

Brady Lanham, a Sutton student, said, “Whenever you’re standing, it keeps you alert and makes you want to work harder.”