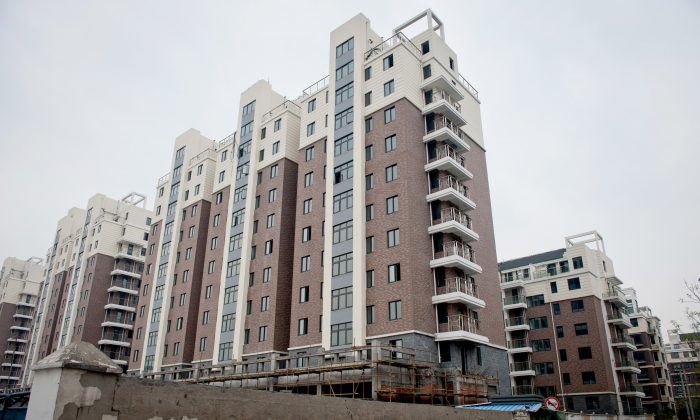 A group of apartments that were built in Hangzhou, capital of Zhejiang Province, sit vacant, as the construction company has gone bankrupt, on on April 10, 2012. Also in Hangzhou, the developer China Metallurgical Group Corporation faces huge losses, as the local governments do not have the money to pay off debts to the company. (STR/AFP/Getty Images)
China

A major land developer is feeling the ripple effect of a risky property market that has left it “holding the bag” on real estate contracts with Binjiang, a district of Hangzhou City in eastern China’s Zhenjiang Province.

China Metallurgical Group Corporation (MCC), a powerhouse engineering and construction company and at one time the largest investor in China’s low-income housing program, now wants to get out of this once burgeoning business to escape mounting debt.

On Nov. 30, 2012, the land parcel called Number Two Xiaguan, Binjiang was sold at auction for 5.62 billion yuan (US$917.6 million). The only bidder was Nanjing Old Riverside Construction Investment Company, a subsidiary of MCC. The same company bought the adjacent two parcels called Number One Binjiang and Number Three Binjiang in 2010. The total area of the three pieces of land is over 245 acres. Insiders estimated that the total investment was over 20 billion yuan (US$3.27 billion).

Officials explained that the auction was held in 2010 to promote urbanization in Binjiang. Subsequently, regulations were created to deny land rights to outside parties. Now, industry analysts believe the new regulations were due to MCC’s serious investment losses.

China Investment Securities conducted research showing that MCC’s other engineering and construction businesses were struggling, but the success of the apartment projects for low-income families had lured the company into making the risky investment.

MCC developed a method of collaboration among government, business, and financing institutions, in which the government leads the demolition and relocation, followed by business investment in the housing projects, and then the financial institutions supply the additional funding needed for the projects. As a central-level enterprise, MCC’s financial strength and borrowing power were highly valued by the local government.

The local government relied on land sales for revenue to repurchase the finished apartment complexes from MCC, or to reassign capital paid in advance by MCC. But the government couldn’t t keep up with the rapid project completions, resulting in nonpayment on the loans.
A former employee of MCC told the Economic Observer that the local government could not repurchase the finished apartments because of its ever-changing regulations and reduction of real estate tax revenue.

The report relies on the housing contract’s accounts receivable terms for advance funding for more than a year. Since a large amount of debt could not be collected, MCC had to extend its debt repayment period while its financial costs surged up.

The Economic Observer reported that in July, Liu Fuming, the CEO of MCC Real Estate Group Co., Ltd. said the company decided last year to ditch the low-income apartment projects. Although 5.5 billion yuan (US$900 million) has been collected, there is still a large amount of money invested in those projects and no further payments in sight.