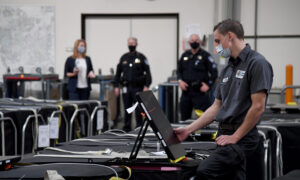 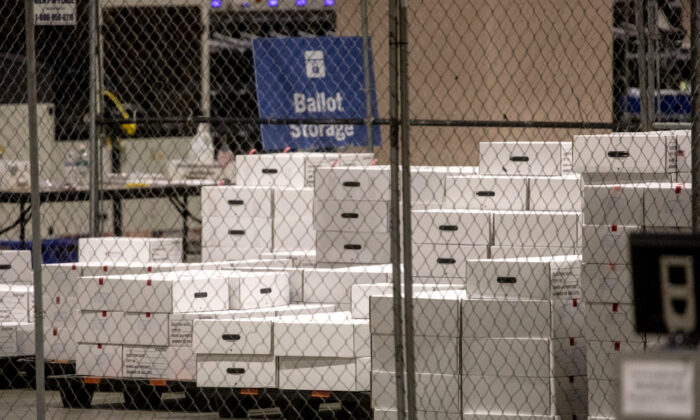 Boxes of counted ballots are seen locked in the ballot storage area at the Philadelphia Convention Center in Philadelphia, Pa., on Nov. 6, 2020. (Chris McGrath/Getty Images)
Viewpoints 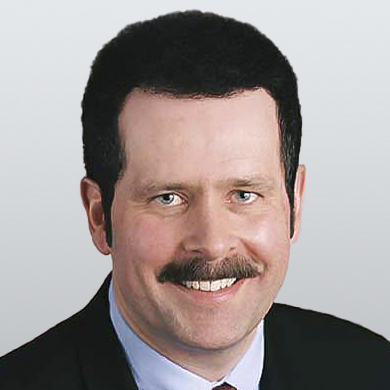 Voter fraud has a long history in U.S. elections. Since the nation’s independence, there have been 1,302 proven cases, resulting in 1,125 criminal convictions. This year’s election is likely to add to those tallies.

A witness at the Arizona state legislative hearing testified to truckloads of ballots arriving to be counted for 10 days after the election. Her supervisors gave no answer as to why the ballots kept arriving.

In a paper published Dec. 4 by the nonpartisan Thomas More Society’s Amistad Project, data experts estimate that 300,000 potentially fraudulent ballots influenced the outcome, including more than 200,000 illegal ballots that were counted and about 75,000 legal votes that weren’t counted.

At the Georgia state Senate Oversight Committee’s Dec. 3 hearing, legislators were presented with more than 100 sworn affidavits, as witnesses, including local election officials, testified to potential fraud and irregularities, while statistical experts critiqued the implausible results.

The Election Department sent home the ballot counters at the State Farm Arena in Atlanta at 10:30 p.m. on Election Day. The supervisor told Republican poll watchers to leave because counting was done.

Yet, surveillance tape shows four election workers subsequently pulling ballots out of cases hidden underneath a table. Between 11 p.m. and 1 a.m., the counting of tens of thousands of ballots continued without Republican poll watchers present. A massive vote spike for Biden was recorded at 1:34 a.m.

The Trump legal team established that 2,056 felons voted illegally; 66,248 underage teenagers voted; 2,423 voted that weren’t registered to vote; 1,043 illegally voted using a P.O. Box; 4,926 voted past the legal registration date; 10,315 who died before the election; 395 cast ballots in two states, which is illegal in both states; 15,700 filed changes of address to move out of state prior to Election Day; and 40,279 moved to a different county and failed to re-register to vote in the new one.

In a state where Biden leads by only 12,670 votes, the Amistad Project puts the number of illegal votes counted and legal votes not counted at more than 200,000. Hence, the Trump campaign’s Dec. 4 lawsuit detailing thousands of voting irregularities and fraud.

At the Dec. 2 Michigan state Senate Oversight Committee hearing, three witnesses, including a Dominion Voting Systems employee, attested that on Nov. 4 at 4:30 a.m., a truck arrived at the rear of the polling station basement with 100,000 ballots in garbage cans. A staffing company employee contracted by Dominion testified that batches of ballots were scanned 8 to 10 times. One witness was told to backdate ballots with phony dates.

According to one expert’s sworn affidavit, in the counties of Kent, Macomb, Oakland, and Wayne, there were 289,866 more ballots processed than humanly possible, given the time and equipment on hand. The Amistad Project’s experts identified more than 500,000 potentially fraudulent ballots statewide. Biden’s lead there is 154,188 votes.

In Nevada, Biden’s lead is only 33,596 votes. Evidence submitted at a Dec. 3 court hearing documented the following: 4,000 noncitizens voted; 8,000 ballots cast by voters with addresses that are physically nonexistent; 15,000 votes cast by those registered at vacant or commercial property addresses; 42,000 Nevadans voted twice; 1,500 dead people voted; and 20,000 voters had out-of-state addresses.

According to the Election Integrity Project, 2,410 Nevada voters registered to vote in California but voted unlawfully in Nevada. More than 140,000 illegal aliens were registered to vote and sent ballots using a Department of Motor Vehicles loophole where illegals who apply for licenses are automatically signed up to vote.

On to Pennsylvania, where Jesse Morgan, a truck driver for a U.S. Postal Service subcontractor, signed a sworn affidavit that he drove 288,000 completed ballots across state lines to Lancaster, Pennsylvania, from Long Island, New York. Morgan says the trailer he was driving subsequently disappeared overnight from its parked location.

Based upon witnesses and expert analyses, the Trump legal team contends that on election night, 848,977 votes were entered secretly with no observation. The Amistad Project found more than 100,000 potentially fraudulent ballots. Biden leads Trump by 81,660 votes.

Organization for Security and Cooperation in Europe

The 57-nation Organization for Security and Cooperation in Europe (OSCE) is the preeminent election observation body. The OSCE assesses whether elections are characterized by confidence, transparency, and accountability, among other vital features.

By this standard, America’s election was a failure. Americans aren’t confident in the outcome; half the electorate thinks it was stolen from Trump. Election officials and politicians from both parties are steadfastly preventing a transparent accounting of the balloting through, for example, signature verification of mail-in ballots.

According to OSCE, “absentee, early, or postal voting … need to be regulated carefully in order to ensure secrecy of the vote and thus full confidence in the process.” Clearly, that didn’t happen. Every voter will pay a lasting price for such negligence, as only genuinely democratic elections form the basis for legitimate government.