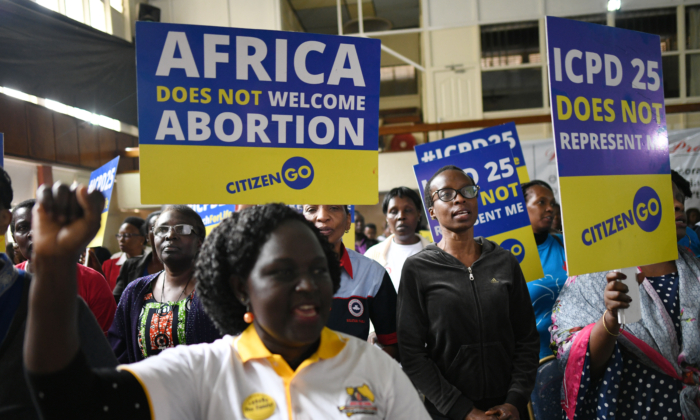 File photo: Anti-abortion, and pro family activists hold placards during a prayer rally to protest against an abortion agenda in Nairobi, on November 14, 2019. (Simon Maina/AFP via Getty Images)
Africa

The Reverend Kenneth Meshoe is not accustomed to celebrating unless he is presenting a sermon at his local evangelical church.

As the leader of the African Christian Democratic Party (ACDP), a political organization with only four seats in South Africa’s raucous 400-member parliament, where fists sometimes fly, he does not get much time to get his points across. When he does speak, his voice is often drowned out in a cacophony of jeers from members of bigger parties … especially when he stands up to condemn the most liberal abortion laws in Africa.

Meshoe has done this ever since the fall of apartheid and the induction into government of Nelson Mandela’s African National Congress (ANC) in 1994.

But these days, he is “dancing on moonlight” in the halls of Parliament in Cape Town.

“What has happened in America is wonderful, and I hope it serves as an example to Africa and to the world that life is sacrosanct—that only God should have the power to decide who lives and who dies,” Meshoe told The Epoch Times, referring to the recent U.S. Supreme Court decision overturning Roe v. Wade, the seminal 1973 precedent that largely legalized abortion in the United States.

The ruling was seen as a pivotal decision for women’s health issues in the United States and indeed the world, and many countries took their lead from it—Africa included.

Like in the United States, the issue of abortion has for decades been politically divisive on a continent where it is anathema to many cultures, but where there has nevertheless been liberalization of abortion laws for the past 30 years.

According to the Center for Reproductive Rights, abortion is prohibited under any circumstance in six countries on the continent, including Congo, Egypt, and Senegal. Three decades ago, this was the case in almost every one of Africa’s 54 countries.

Seven countries that now allow abortion on request within a given gestational period, include Angola, Benin, Mozambique, South Africa, and Tunisia.

Most African countries permit abortion in certain circumstances, such as if the pregnancy is the result of rape or incest, or if it will save a woman’s life.

Meshoe takes issue with the changes.

“I don’t like this word, ‘liberalization,’” he scoffed. “It implies something good. What has been happening in Africa down the years is abhorrent. Why can’t all these unwanted children be put up for adoption? Why must they be killed? I’m hoping the U.S. Supreme Court decision now spreads to Africa, big time.”

For decades, the ACDP has waged a lonely struggle against termination of pregnancy in South Africa. It was the only party to vote against adoption of the final version of the South African Constitution, because it enshrined abortion on demand and the protection of sexual orientation.

In South Africa, like in a growing number of African countries, a woman has the choice to have an abortion within the first 12 weeks of pregnancy, and at a later stage under certain conditions.

It’s also one of three African countries (the others being Benin and Zambia) that permit abortion (extending into week 20 of pregnancy) if bearing the child would “significantly affect” the woman’s “social or economic circumstances.”

Pro-abortion groups in Africa argue this is necessary on a continent with the highest poverty rates in the world.

To Meshoe and other pro-lifers, however, the legislation is an “abomination.”

With abortion available free-of-charge at most public health facilities in South Africa, there are at least 250,000 procedures performed in the state sector annually, according to the health department, with tens of thousands more arranged privately.

Sanusha Naidu, a specialist in African affairs at the Institute for Global Dialogue based in Pretoria, expects the spread of abortion rights on the continent to “at least slow” because of the overturning of Roe v. Wade.

“The implications of this beyond the U.S. are quite staggering. Policies and decisions made in the U.S. usually echo around the world,” she told The Epoch Times.

“It definitely emboldens conservative governments who believe abortion is a liberty that should not be guaranteed to women, and should be controlled by the state[s]. It definitely will have a snowballing effect.”

Amukelani Matsilele, public diplomacy researcher at the African Centre for the Study of the United States at Wits University in Johannesburg, told The Epoch Times that African governments often use the United States as a “democratic reference point.”

Naidu argues that the U.S. Supreme Court decision could lead to a “kind of rejuvenation” of the global gag rule first implemented by President Ronald Reagan in 1984. Reinstated by President Donald Trump, the rule also known as the Mexico City policy, blocked U.S. federal funding to nongovernmental organizations associated with abortion services.

“Some African governments are very fond of citing so-called ‘American expertise’ when it suits their purposes. In 2020, there was a study in Kenya that found that the Kenyan government was using the global gag rule to stymie abortion debate,” she said.

The administration of U.S. President Joe Biden has repealed the rule, but Naidu says the overturning of abortion rights in America “could easily lead to similar moves in Africa, where attitudes are already hard-set against abortion.”

One of the pro-lifers hoping to take advantage of the Roe v. Wade overturning is Nigeria’s Obianju Ekeocha, one of the continent’s most outspoken anti-abortion advocates and founder of the Culture of Life Africa organization.

“The international community makes a big noise about population explosion in Africa, but to Africans every child born is a gift to the community,” she told The Epoch Times.

In particular, Ekeocha hopes that events in the United States will bolster her fight against “forces” she said are using abortion to “perpetuate population control” in Africa.

“I know of many large African families where all the siblings are doctors, teachers, nurses, and so on. They are all making a living just fine. Yes, there are many big families who are poor. But that’s due to other factors, not because their family is large,” she said.

It says 97 percent of all unsafe abortions happen in developing countries, mostly in Africa.

But Ekeocha maintains there are “better ways” to ensure the safety of mothers.

“What makes the difference in maternal mortality rate is not abortion, not even contraception, but it’s actually basic antenatal and prenatal care, access to doctors during pregnancy, access to blood transfusion services for cases of bleeding, access to good obstetric care…”

But, says Naidu, most countries in Africa are very far from gaining access to such healthcare. In its absence, she says, they depend on U.S. assistance to fund family planning and quality post-abortion services.

That help, she says, is now in jeopardy.

“I have no doubt that the American taxpayer dollars can be used for better things in Africa, things that will improve health on the continent without killing babies,” he said.