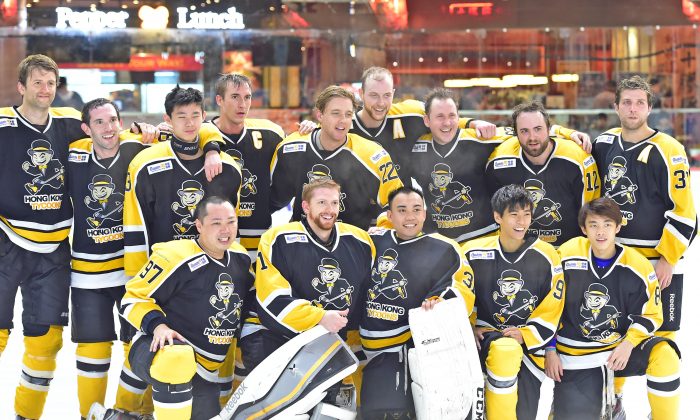 HONG KONG—The Playoff Final in the CIHL at Mega Ice on Saturday March 14, went down to the wire.

The glass was shaking from the checking, the blood was being shovelled off the ice, girl friends were worried about their men playing the game. This game was for the cup the right to brag the whole year of the ram. Like rams these animals on skates bumped and bumped until early into overtime when the tycoons bumped the pluck into the net.

The game was amazingly close going back and forth with neither team getting more than one goal ahead throughout the whole match. Kory Falite opened the scoring for Tycoons 3-minutes into the game only to see Gregory Smyth of Warriors level the score 3-minutes later. Brad Smith put Tycoons back in front but Devin Welsh pulled the score level to finish Session-1 at 2-2.

Another 2-goals by each team in Period-2 took the score to 4-4 at the ice cleaning break. Falite and Smith again scoring for Tycoons, and Jake McDonnell and Michael Yoshino getting on the score sheet for Warriors.

The game had great glass shaking board checks and some penalties, but the goal by Yoshino that tied the game 4-4 was magic, top upper right corner just what he wanted when he positioned the flat pluck right in the middle of his stick, the goalie must have thought to himself, too fast and accurate for me as it passed through.

The game intensified further in the Final Stanza with McKenna and Smyth sent off-ice for Warriors and Chris Belisle and Anthony Devoltz penalised for Tycoons. With 4-minutes left on the clock and the score standing at 4-4 the curse of the number 4 struck, Warriors’ No.4, Jasper Tang, dropped to the floor, blood all over the ice, team-mates asked for a stretcher but he walked off, blood dripping on his red jersey.

Just 8-seconds later his team-mates showed their support with a goal to make it 5-4 to Warriors, the momentum was now on their side and there was a further reason to win and drink champagne from the cup.

With a minute and twenty three seconds left on the clock Jim Fanstone stepped up to score for Tycoons, pushing the game into overtime. But the end came soon; as Tycoons’ Jonathan Szychta netted the puck for a 5-OT6 result.

Tycoons produced 39 strikes on goal against 28 for Aces and once again it was great keeping by Jasen Awalt in the Warriors goal to keep the match so close, but it was fitting that Szychta assisted by Smith and Falite got the winner.

Tycoons were the top team in the pre-Christmas matches with goal scorers Szychta, Smith and Falite combining in attack to dominate many games. After the Christmas break Tycoons had a period of disruption with key team members including Falite out of action and Macau Aces came to the fore with solid winning performances.

Defending champions, Warriors had been down the standings and struggling a bit for most of the season. But the turning point for both teams came just a few weeks ago when Falite returned to slot back into the Tycoons attack and Devin Welsh one of Warriors stars of last season returned to the ice after a prolonged absence with a back injury helping them to win the last few matches.

The CIHL 2014-2015 season has again demonstrated fast, aggressive, skillful hockey by fit and able players. Each year sees new stars introduced or emerge and highlights for me of this year’s matches have been the great attack pairing of Smith and Falite for Tycoons, the all round play of Jeff Ceccacci for Aces and Jordan So for Sharks, and the solid goal keeping by Jason Awalt (in particular) for Warriors.