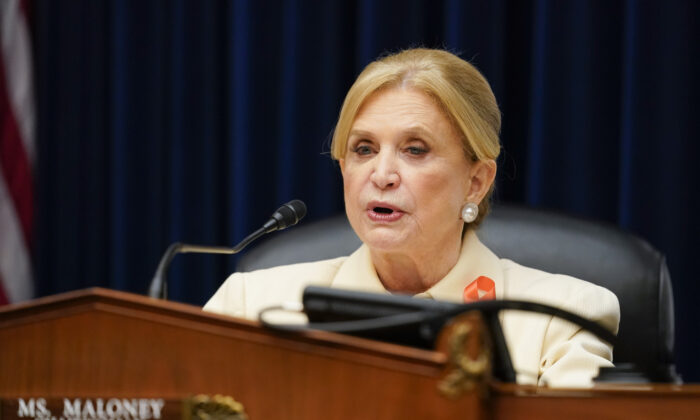 Democrats on the House Oversight Committee demanded in an Aug. 11 report that the federal government do more to respond to alleged “election misinformation,” which they say has weakened the capacity of election offices across the United States to carry out their official duties.

The committee report claimed that so-called misinformation efforts led by President Donald Trump and other conservatives have overwhelmed election offices and caused an uptick in threats against election workers (pdf). To respond to this, Democrats said, “strong federal leadership is needed.”

“Lies and confusion about the 2020 election are an ongoing threat to representative democracy,” the report states. “Misinformation and disinformation drive fraudulent efforts to cast doubt on legitimate election results, increase threats to election administrators, and create pathways for bad actors to subvert our democratic elections.”

In the same strain, the report added, “Lies about our elections, whether intentional falsehoods or pervasive misunderstandings, endanger both the democratic system and the people who administer our elections.”

A key focus for Democrats in the report is the ways that the alleged misinformation about the 2020 election has increased threats against election officials and made it more difficult for them to do their jobs.

“Election officials have been continuously vilified by conspiracy theorists led by former President Donald Trump and his supporters,” the Democrats wrote in one section of the report.

In a subsection about “disinformation campaigns” carried out by “malicious domestic actors,” the report dives deeper into Democrats’ claims on this front.

“Leading up to the 2020 presidential election, misinformation about all aspects of the voting process surged,” they wrote. “The coronavirus pandemic created a unique environment for voter confusion as states sought to adapt their rules on registering and voting by mail, creating opportunities for online misinformation to spread widely across the country.

“Election administrators informed the Committee that responding to the influx of threats and disinformation required hours of work and increased security that made it more difficult for them to do their jobs. The President of the Election Officials of Arizona reported to the Committee that responding to the surge of concerns about voting by mail was ‘distracting us to the point where we can’t get our real work done.’ As each new false allegation of voter fraud was released and spread online, ‘the angry phone calls and threats start anew.’

“The President of the Florida Supervisors of Election told the Committee they ‘have been consumed with responding to numerous public records requests, debunking election myths, and increasing voter education efforts to strengthen voter confidence in the elections process.’

“The mounting pressures facing election workers and administrators are compounded by a vicious cycle of misinformation intended to reduce public faith in our election system.”

The U.S. Department of Justice (DOJ) did find in an investigation that more than 1,000 election workers reported contacts that were “hostile or harassing.”

However, though the report implies that the uptick has caused a great deal of violence, DOJ findings showed that only about 11 percent of those reports—about 110 cases—met the threshold for federal criminal investigation.

A key critique in the Democrats’ report involved efforts by state legislatures to tighten their election security laws in the wake of continuing concerns over the integrity of the 2020 election.

In late 2021, Democrats in Congress attempted to respond to this spurt of tighter election laws—which many Democrats characterized as a “new Jim Crow”—with a series of ill-fated bills to strengthen federal control over elections.

Though those efforts failed one by one to win enough support in the Senate, where Sen. Joe Manchin (D-W.Va.) joined Republicans in opposing several of the proposals, Democrats have remained frustrated with the litany of new laws. The Aug. 11 report makes clear that these laws are still a prime target for disgruntled Democrats.

The report contends that “dangerous, misinformation-driven, so called ‘election integrity’ laws … threaten to undermine the voting process in future elections.”

Since the 2020 election, the report says further down, “state legislators have … introduced and passed hundreds of election laws based on the Big Lie. Some of these bills would give partisan legislators more control over non-partisan election systems, while simultaneously making it more difficult for election officials to effectively do their jobs.”

Throughout the report, Oversight Democrats leave no doubt as to whom they blame for the rise in “misinformation”: President Donald Trump and his conservative allies.

“Misinformation led to violent death threats against local election officials, often inspired by comments from right-wing politicians and activists, leading many experienced officials to leave their positions,” the report claims.

In another section, Democrats named several conservative commentators who have cast doubt on the results of the 2020 election by name.

“In Florida, Alex Jones, Roger Stone, and Mike Lindell spread conspiracy theories about one election official for responding to false allegations of fraud,” they wrote in an effort to bolster their claim that conservatives are largely responsible for issues experienced by election officials.

Democrats in the report targeted two election audits that took place in Arizona and New Mexico in the aftermath of the 2020 election. Despite being approved by relevant elected officials in the state, Democrats claimed these audits were “fraudulent.”

The most important audit in the aftermath of the 2020 election took place in Maricopa County, Arizona—a blue stronghold in the state, which President Joe Biden reportedly won. Maricopa County was at the center of electoral controversies, spurring Republicans in the Arizona State House to order a full audit of the county’s results.

The other prime audit targeted by Democrats in the report took place in Otero County, New Mexico.

These audits, Democrats said, were “partisan” and “highlight the grave harm that could result from such efforts.”

Committee Democrats said that the audits in Arizona and New Mexico were the result of “a network of malicious actors … encouraging elected officials across the country to undermine the integrity of their election systems.”

“The audit [in Maricopa County],” Democrats claimed, “undermined public confidence in elections and fostered efforts across the country to suppress votes and subvert elections.”

They warned of the possibility of such audits increasing after the 2022 elections, which they said could further damage trust in the electoral process.

“Fraudulent audits and unfounded refusals to certify election results may multiply during the 2022 midterms, further damaging trust in the electoral process.”

In concluding their report, Democrats argued that “strong federal action is needed” to counter these alleged threats to the democratic process they say is caused by misinformation.

“The threat posed to American democracy by election misinformation has changed and increased dramatically in the past two years,” they wrote. “The Committee’s investigations make clear that the greatest current threat to democratic legitimacy now comes from lies by domestic actors who seek to convince Americans that their election systems are fraudulent, corrupt, or insecure.”

They describe the “urgent need to implement a federal whole-of-government plan to support local and state election officials as they respond to misinformation and share accurate information with voters. This response must also include vigorous law enforcement efforts to protect election officials from harassment and violence.”

Democrats then laid out a litany of suggestions for actions by both the president and Congress.

“The President should designate a lead federal agency or office to support state and local efforts to counter election misinformation,” they wrote, in a plan reminiscent of the now-defunct Department of Homeland Security Disinformation Governance Board, which was shut down after critics blasted the planned body as reminiscent of George Orwell’s “thought police” in the novel, “1984.”

“[The president] should direct relevant agencies to coordinate with the lead agency on overall approaches, chains of communication, and best practices for advancing accurate information about the election process.”

The report continues with the suggestion that “all relevant federal agencies should use their authorities in coordination with the lead agency to support state and local election officials’ efforts to counter misinformation during and after elections.”

“During the 2020 election, the [CISA webpage] sought to counter election misinformation,” they wrote. “CISA should continue to update this site to respond to national misinformation narratives. Trusted local voices, however, are the most effective messengers against misinformation.”

The report went on to say that CISA’s misinformation team should coordinate with state authorities to create state-level “rumor control” websites.

Further, Oversight Democrats demanded that the DOJ “aggressively pursue criminal and civil enforcement against those who threaten or harass election administrators.”

To aid in this, Democrats recommended the creation of a DOJ task force that would aid local officials in determining which federal charges they can bring against those who threaten or harass election workers.

Finally, on a congressional front, Oversight Democrats called for expanding funding allocations to election offices across the country, in addition to strengthening already-existing laws against threatening, harassing, or harming election officials.

The items targeted by the report—allegations of misinformation, attacks on legally ordered election audits, and on election integrity legislation passed in state legislatures across the United States—fit into the larger context of a string of failed efforts by Democrats during the 117th Congress to strengthen federal control over elections.

Election integrity bills have been a focal point for attacks by Democrats, who have said that the legislation constitutes a “new Jim Crow.”

Over the summer and early fall of 2021, when many legislatures were considering and passing such legislation for the first time, Democrats put forward a litany of bills designed to counter this alleged threat.

The most ambitious of these, the For the People Act, would have rendered the federal government more control over elections than it has ever had.

Among many other provisions, that bill would declare Congress has unilateral authority over the conducting of elections in any areas where state and federal prerogatives clashed.

The bill also would have forbidden illegal aliens from facing legal consequences for efforts to vote illegally, allowed for election day voter registration, and permitted convicted felons to vote.

This bill, by far the most expansive piece of election legislation put forward by Democrats, passed the House along party lines but failed in the Senate after Manchin refused to lend it his support.

Other bills, including the House-created “John Lewis Voting Rights Advancement Act” and a compromise bill created by Manchin, would have gone substantially less far—largely reinstating parts of the 1965 Voting Rights Act that were struck down in 2013 as unconstitutional by the Supreme Court in Shelby County v. Holder.

Like the For the People Act, these too failed to win enough support in the Senate to overcome the 60-vote filibuster threshold.

Republicans have been almost unilaterally opposed to Democrats’ election schemes, which they have said are an effort at “federalizing” elections.

Thus, even if Congress were to move ahead with a legislative response to Oversight Democrats’ claims, it is unclear whether the bill would get very far in the upper chamber.

Because of GOP opposition, it is likely that any such effort by Democrats will fail for the foreseeable future, short of the party gaining a 60-vote supermajority in the Senate.