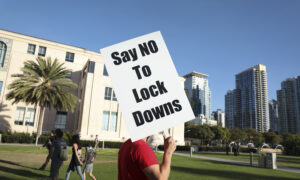 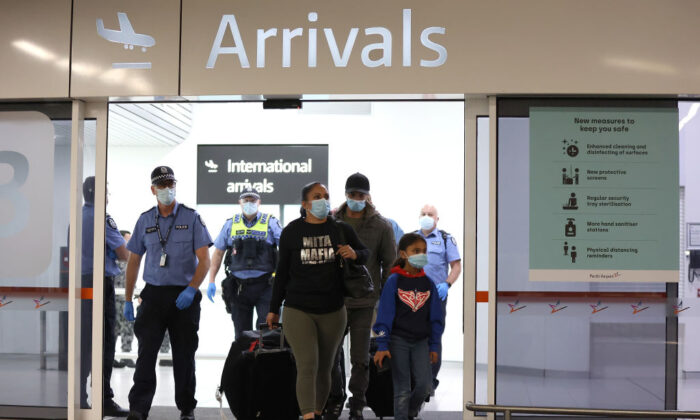 PERTH, AUSTRALIA - OCTOBER 19: Passengers from Qantas flight QF583 are escorted to waiting Transperth buses by Police Officers after being processed following their arrival at Perth Airport from Sydney, before being driven to a CBD hotel for quarantining on October 19, 2020 in Perth, Australia. Paul Kane/Getty Images)
Australia

Australia has been warned it faces a pressure cooker moment as state premiers urge a dramatic reduction in international arrivals to stop coronavirus outbreaks.

“We are at a pressure cooker moment,” Queensland Premier Annastacia Palaszczuk told reporters in Brisbane on Wednesday.

But Home Affairs Minister Karen Andrews rejected calls to reduce caps, with the issue set to be high on the agenda at Friday’s national cabinet meeting.

“We need to learn to live and to work in the COVID environment in which we find ourselves,” she told reporters on the Gold Coast.

“The first response should not be to close down our borders.”

Ms Andrews said weekly caps of about 1000 passengers entering Queensland and 3000 coming to NSW were not large.

Outbreaks of the contagious Delta variant have plunged more than 12 million Australians into lockdown.

She told the ABC’s 7.30 Report she would put a case for a “massive reduction” in caps by 50 per cent or 75 per cent when the national cabinet meets on Friday.

“We need to do this now because we need to contain this Delta strain.”

WA Premier Mark McGowan believes the vast majority of people granted exemptions to travel overseas for work and study should not have been allowed to leave.

“They should stay home while there is a pandemic running wild around the world,” he told reporters in Perth.

He called for a tougher approach to granting permission to leave, with people inevitably wanting to return to Australia.

Ms Andrews disputed suggestions that half the people entering the country were not Australians.

Between March 25 last year and May 31 this year,156,507 Australian citizens and permanent residents were granted exemptions to leave Australia, with 84,031 requests denied.

“New South Wales will always do our fair share as we have done. We do it without complaint,” she told reporters in Sydney.

Ms Berejiklian said about half of the people coming through Sydney ended up in other states.

“I’m interested that other premiers are complaining about what they have to do, but it’s far less to what New South Wales is doing.”

Victorian Health Minister Martin Foley questioned whether the lesser evil was having millions in lockdown or scaling back quarantine while the federal vaccine rollout improved.

“This would take us in precisely the wrong direction,” he said.

The major employer group is suggesting home quarantine with strict conditions and additional capacity as ways to bring in more workers.