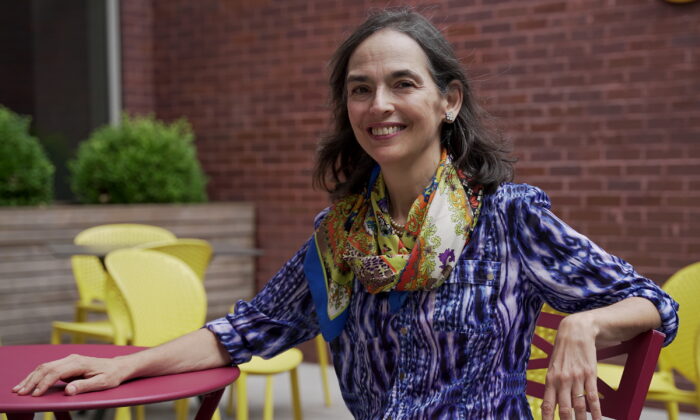 Lenore Skenazy, founder of the Free-Range Kids movement and president of the nonprofit Let Grow, in New York on Sep. 14. (Brendon Fallon/The Epoch Times)
US Features

Overparenting and the Crippling of the Next Generation

Here’s an excerpt of her interview on American Thought Leaders:

Jan Jekielek:  Some years ago, you wrote a column: “Why I Let My 9-Year-Old Ride the Subway Alone.” You got in big trouble. But now I guess the question is, why did you get in trouble?

Lenore Skenazy: Two days after I wrote the column, which was in the New York Sun, I was on the Today Show, MSNBC, Fox News, and NPR.

I got the nickname “America’s worst mom.”

I got into trouble when I was on these shows because I said: “I trust my son. I trust the city. I trust strangers.” And to this day people ask: “But what if he had never come home?”

Mr. Jekielek: In the film, Dr. Peter Gray talks about how something has really changed dramatically.

Mrs. Skenazy: Peter Gray is one of the co-founders of Let Grow, the nonprofit I run that’s trying to bring independence back to childhood. He’s an evolutionary psychologist who has studied play throughout history and its role in kids’ lives. It’s how the kids learn to make something happen. It’s how they learn to get along.

We have replaced that with something that might look like play, but it’s really adult-run. I mean, if you’re going to lacrosse or soccer or Kumon or chess, whatever it is, there’s an adult showing up.

But there’s no chance for the kids to figure out all the messiness of how to get along.

We’re not giving them a chance to come up with anything on their own and make it happen.

Mr. Jekielek: On this show, one topic which I haven’t really talked to anyone about until today, the only way to call it is a “safetyist culture.”

Mrs. Skenazy: We’re in a society that’s telling us almost every day that everything your child is doing could be a disaster unless you’re hypervigilant.

Mr. Jekielek: We’re seeing this during this whole COVID pandemic, too. You want to reduce the risk to zero, which in my understanding is not remotely possible.

Mrs. Skenazy: Yes. The idea of reducing risk to zero, that’s exactly the issue here. It drives parents crazy when we think we can control for everything, and we can’t.

One reason we’re so nervous about kids is because you can’t say when something terrible happens that God works in mysterious ways, or there’s a greater plan we don’t understand, or even that fate is fickle. If you could realize that it’s not all in your control, you could relax a little, because if something goes horribly wrong, God forbid, it’s not all on you, and people understand. There’s some sympathy and support.

But when it’s all on you—and we are in this very judgmental era when we think anything that goes wrong is your fault as a parent—you feel like you must control everything.

Mr. Jekielek: Something you document extensively in this film is that there’s a huge cost when this play, this freedom to figure stuff out, is taken away from children.

Mrs. Skenazy: What’s interesting is when I ask people about what they loved doing as a kid and they reminisce, and then I ask, was your mom there? Nobody says yes. That’s because we weren’t under constant supervision.

Life is so rich, but we keep editing it down. There’s something very different about exploring the world on your own and letting curiosity blossom.

Mr. Jekielek:  You were talking in the film about this mental health crisis among the kids.

Mrs. Skenazy: We have a society dedicated to making sure that children won’t have to deal with anything scary or bad, or if something comes up, there’s somebody to help them through it. They’re missing the opportunity to face little problems along the way and get used to them.

What if there’s a spat, for example? You want to jump in before anyone’s feelings get hurt. But if you’re telling a kid, no, you can’t even handle an argument with your friend, a spat in the midst of playing Barbies or dress up, you’re telling them they have no inner strength.

You’re taking away the opportunity for a kid to get used to one of the many things that they’re going to have in their life, which is an argument with a friend.

One of the things that Peter Gray says is that children are built to encounter the world, and that includes all the good stuff and a good dollop of the bad stuff, too.

And if you only have the parties and the sleepovers and the Chuck E. Cheese, and you never have the arguments, the betrayals, a little bit of teasing or frustration or disappointment, you don’t have the warp and the weft. You only have one way of the threads going, and that’s not a strong net.

Psychologically you’ve been deprived of developing the entire structure that’s going to hold you up for the rest of your life, which is “I can deal with that,” “That reminds me of that time,” or “That was horrible, but I lived.” To try to make kids’ lives absolutely frustration-, sadness-, and risk-free is to try to keep the kid on the umbilical cord, embryonic, and then send them off while they’re still like this and say, good luck, kid.

Mrs. Skenazy: If discomfort is illegal or so awful that kids don’t feel they should have to deal with it, you’re creating a society that is hypersensitive and quick to look for somebody to come and do what mom did.

Mr. Jekielek: In “Chasing Childhood,” you go into communities that are interested in parents who are thinking: I’ve gone a little too far in protecting my child. How does that work?

Mrs. Skenazy: I formed Let Grow with Peter Gray, Dan Shackman, who used to be the chairman of the board of FIRE, which fights for free speech on campus, and Jonathan Haidt who co-wrote the “The Coddling of the American Mind.”

The goal of Let Grow was to re-normalize the idea of letting go.

Schools are doing the project because they’ve seen the kids getting really, really anxious and sometimes very passive because they don’t want to do anything wrong, and they’re awaiting orders. This is not good in the classroom. You want kids who are curious and alive and excited.

The project doesn’t take much class time, and it’s free.

If you want a society where kids become adults who solve their own problems and don’t wait for the authorities and don’t call HR and learn how to get along and think of brilliant new ideas that might be a solution to a problem, you need practice. And play is the ultimate practice for being a functioning adult.

We think of kids as playing they want to be like grownups, but what are they doing? They’re organizing a game, it’s boring, they want to change the rules: Let’s vote. OK, let’s change who’s going to be first base, or let’s play backward.

It’s possible that democracy is a reflection of children’s successfully playing. If you don’t have children playing, and if you have somebody telling them where to be all the time, you’re not preparing them for democracy; you’re preparing them for something else.