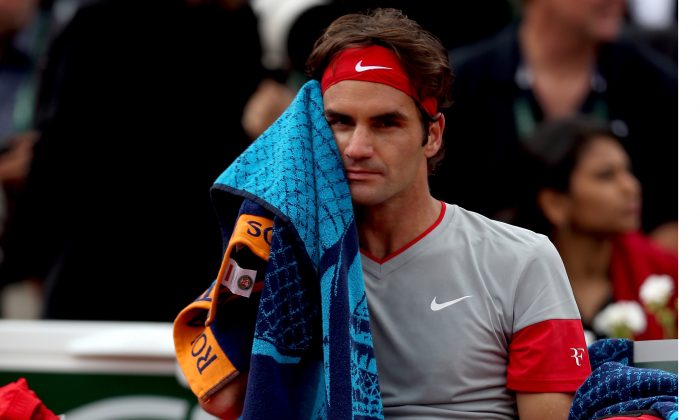 Roger Federer of Switzerland wipes his face with a towel during a break in his men’s singles match against Ernests Gulbis of Latvia on day eight of the French Open at Roland Garros on June 1, in Paris, France. (Matthew Stockman/Getty Images)
International

Clay courts are not the favourite surface for Roger Federer and so it proved again at Roland Garros last Sunday (June 1) when he lost his last 16 match to Ernest Gulbis of Latvia in a hard 5-setter. This was Federer’s earliest exit from the French Open in 10 years.

Federer will now have to wait until his favourite tournament at Wimbledon later this month to again try to beat Jimmy Connors’ record of 41 Grand Slam Quarter Final appearances. Federer equaled Connors’ record (one of the few left for him to conquer) in reaching the Quarter Finals in the 2014 Australian Open in January.

Seeded four in the French Open, and winning through to the last 16 he then came up against a rejuvenated, 25-years-old Ernest Gulbis who has won two titles this year (both in France–Marseille Open where he beat Richard Gasquet and Jo-Wilfried Tsonga and then the Open de Côte d’Azur in Nice just a week before Roland Garros). Gulbis of Latvia was on a seven match winning streak. He last reached the Quarter Finals at the French Open in 2008.

After winning the first set tie breaker 7-6 Federer missing a vital smash at set point in the second set and went on to lose the set 6-7. He struggled to get into the third set losing it 2-6 and although he won the fourth 6-4 he missed out 6-3 in the fifth.

Federer now 32-years old and slipping a little in the rankings is still in the top four in the world.