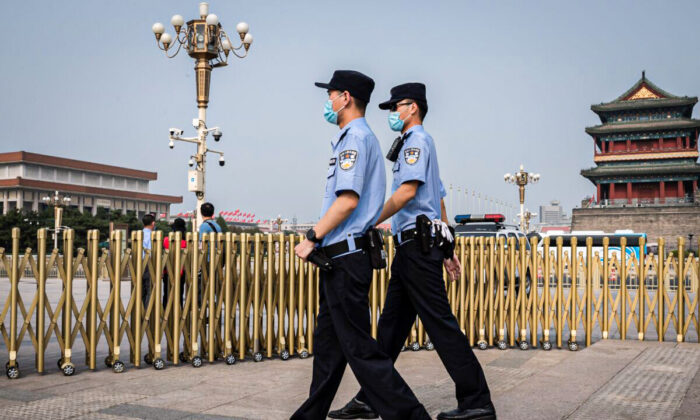 Police officers patrol an area outside Tiananmen Square on World Press Freedom Day in Beijing on May 3, 2020. (Nicolas Asfouri/AFP via Getty Images)
Thinking About China

An overestimation of the technical abilities of the Chinese police leads local activists to give up protecting themselves, including their electronic devices—putting themselves at even greater risks.

Over the past few years, every so often I’d hear from a rights defender in China that local activists just won’t bother to use even the most basic safety measures to protect themselves, and just as important, to protect their colleagues. Such individuals believe that protecting data—on their phones and computers—is not possible. Most of them have spent months to years in China’s RSDL jails or in prison. But they are dangerously wrong and their fatalism is built upon the same wrongful premise as many Western politicians—that communist China has grown too strong and that there’s no point in countering its malign influence because it seems impossible. Thus, they feel powerless in the face of an overwhelming force.

It’s shocking to many people outside of China that rights defenders will use China’s own—essentially police-run—WeChat for communication and to store their data unencrypted right on the desktop of their computer. It sounds unbelievable to some, but it’s very much a reality. Again, the people who do this have already gone through hell after being targeted by police and having such data used against them. In China, after all, a few tweets or even direct, one-on-one chats can be used as evidence for a conviction.

This fatalism is wrong. Yes, China’s People’s Liberation Army (PLA) has a cyber command division of great technological prowess and China’s feared Ministry of State Security (MSS) does, too. However, China’s law enforcement resources are stretched thin and even if it wasn’t, such resources wouldn’t be devoted to some local activist, a house church pastor, or a lawyer. If you were an Edward Snowden-type target, then yes, you should be in fear, and fatalism would be understandable—but rights defenders in China are not such targets.

The Chinese police, and even the MSS, lack the technical abilities to deploy advanced techniques to access data hidden from them—and hiding the data is surprisingly easy. Even higher-level police, and central MSS, have the same problem. And not only do they lack these technical abilities, but they also lack the information about such things or how they can be used. Instead, they rely on a set of fairly basic methods to scour phones, USBs, computers, and whatnot.

When I was in the hands of the MSS authorities—not because I was a target, but because of the information they thought I had on others—they were unusually thorough in their technical investigations of my devices. Yet they failed in almost every respect. A lot of my colleagues—who were targeted by local police, provincial MSS, or central police over the years—arrived at the very same conclusion.

A wide range of interviews conducted over the last two years with victims—who have been detained, interrogated, and had their devices pilfered—show that nothing much has changed. If you are not a high-profile target, the authorities’ abilities and what they can actually do is very limited; and the steps to protect yourself and others are surprisingly easy, and more about behavioral than technical solutions.

Yet this fatalism prevails, leading a few rights defenders to simply give up while most of them continue their work. Many of them are truly fearless, but they fail to take even the simplest steps to protect themselves or, even more important, their fellow rights defenders.

Countering this growing fatalism will be key to ensure that civil society activists can continue their work with fewer risks and with better results.