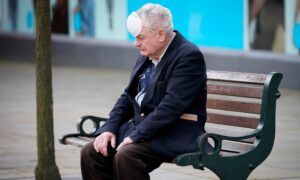 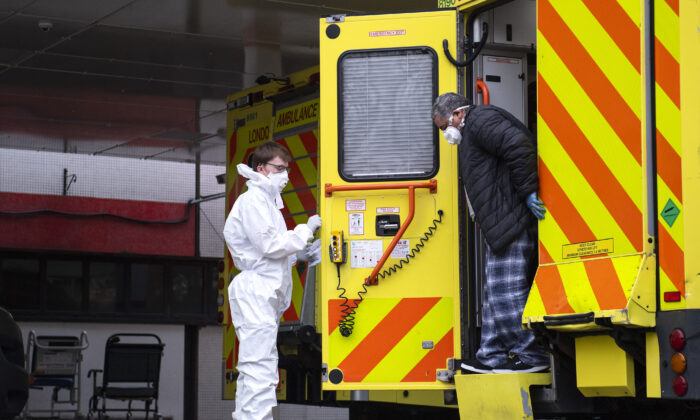 A man with an unknown condition is helped from an ambulance at the St Thomas' Hospital in London, on March 30, 2020. (Justin Setterfield/Getty Images)
UK

The overall number of deaths in England and Wales rose to over 14 percent higher than average as COVID-19 related deaths continued their steady weekly rise, according to the latest figures from the Office for National Statistics.

This latest data, from official death registrations, however, offers a delayed snapshot from two weeks ago. Death rates also lag behind infection rates by around two to three weeks.

Other data suggests that daily infection rates were falling, with the national R rate dropping to 1 just as England headed into the second national lockdown on Nov. 5.

For the last couple of months, the number of deaths with “novel coronavirus (COVID-19)” on the certificate has been doubling roughly every fortnight.

That pattern continued for the week ending Nov. 6, with 1,937 deaths registered for England and Wales—up 558 from last week. Those deaths made up over 16 percent of all deaths.

Other more up-to-date measures suggest that daily deaths may have started to fall.

Weekly deaths of people with the CCP (Chinese Communist Party) virus peaked at 8,758 in April with the first wave and reached a low point of 78 in September.

Overall deaths from all causes on Nov. 6 was 14.3 percent higher than the five-year average for the time of year.

How COVID-19 death cases stack up alongside pneumonia and influenza deaths depends on whether the “underlying cause of death” on the certificate is taken into account.

A far greater number of those with COVID-19 listed die from the disease rather than just “with” it. Where the disease is listed as the underlying cause, CCP virus deaths (1,743) are over five times higher than for pneumonia and influenza (307).

For weekly deaths recorded as “involving” the diseases, influenza and pneumonia numbers are a little higher than for the CCP virus at 2,267.

A real-time snapshot of the disease provided by people recording their symptoms on an app suggests that the rate of infection has continued to drop in many regions.

The study is run by Dr. Tim Spector, a professor of genetic epidemiology at King’s College London.

Spector on Monday echoed his assertion last week that the R rate was close to 1 nationally, although he warned that the virus was rising in the Midlands.

Writing on Twitter on Tuesday, he said there appears to be around 35,000 cases per day, adding, “But this picture of prevalence (number of symptomatic people currently in the population) shows 5 regions decreasing and 5 increasing, showing how the epidemic spreads over time—regionally.”

“Hard to see why [The Scottish Government] is concerned their tiered system in Scotland is not working,” he wrote. “They seem to be doing better than the other UK nations according to the #ZoeCSS app data—although there may still be local areas bucking the trend.”

The ZOE survey’s strength is that it can provide real-time data that can be updated every day.

However, some epidemiologists say its weakness is that it misses asymptomatic COVID-19 infections, and may pick up seasonal flu symptoms.

According to the ZOE website, the survey is “based on around a million weekly reporters and the proportion of newly symptomatic users who have positive swab tests”.