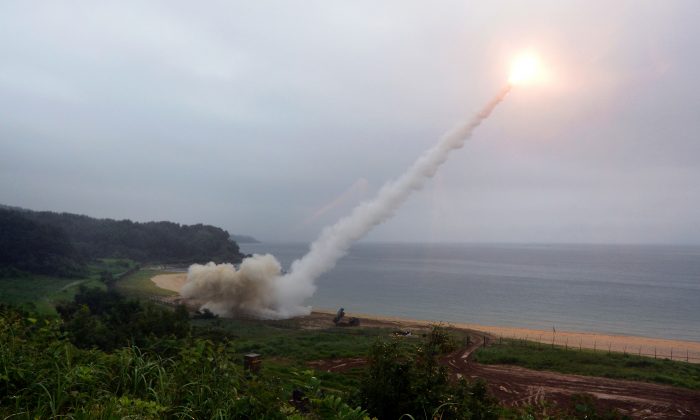 After North Korea threatened to launch a missile attack against Guam this week, the U.S. island was issued a new fact sheet giving guidelines to help residents prepare for “imminent missile threats.”

The fact sheet offers advice if caught outside including, “Do not look at the flash or fireball – It can blind you” and “Take cover behind anything that might offer protection.”

“Lie flat on the ground and cover your head. If the explosion is some distance away, it could take 30 seconds or more for the blast wave to hit,” the fact sheet states.

President Donald Trump said in a tweet Friday, Aug. 11, that the United States is prepared if North Korea acts.

During a missile threat, residents are recommended to take cover as quickly as possible under a concrete structure or below ground after a warning is issued.

In a special address on Aug. 9, Gov. Calvo said that the threat level has not changed.

“I want to reassure the people of Guam that currently there is no threat to our island.

“There are several levels of defense all strategically placed to protect our island and our nation,” he said.

Calvo said the White House reaffirmed its protection of Guam after he reached out to officials.

“I’ve reached out to the White House this morning, an attack or threat on Guam is a threat or attack on the United States, they have said that America will be defended … Guam is American soil,” he said.

“We are not just a military installation, with that said I want to ensure that we are prepared for any eventuality,” Calvo said.

Residents are also told to avoid going outside for at least 24 hours to avoid any radioactive material unless otherwise told by authorities.

President Donald Trump’s threat of “fire and fury” has made plain that the United States can and will defend itself, a fact North Korea must realize, said Secretary of State Rex Tillerson said on Wednesday.

“I think what the president was doing was sending a strong message to North Korea in language that Kim Jong Un would understand,” Tillerson told reporters on the plane with him as he traveled to Guam, the U.S. territory Kim Jong Un threatened with a pre-emptive strike on Tuesday, Aug. 8.

Kim has repeatedly threatened the United States with a nuclear attack and has backed up those threats with ballistic missile tests that have now demonstrated an ability to hit much of the United States. He has also pursued a nuclear weapons program that U.S. intelligence officials have concluded can now produce nuclear warheads for those missiles.

Trump warned North Korea about its threats of attacking the United States at an event at his New Jersey golf club on Tuesday.

“They will be met with fire and fury, like the world has never seen,” he said.

“I think the president just wanted to be clear to the North Korean regime that the U.S. has an unquestionable ability to defend itself, will defend itself and its allies, and I think it was important that he deliver that message to avoid any miscalculation on their part,” he said.

On Wednesday, North Korea threatened to attack Guam, which is known as the “tip of the spear” for the U.S. military’s forward deployed forces in the Pacific.

In a statement sourced to a spokesman for the General Staff of the Korean People’s Army (KPA), the regime said a “pre-emptive strike is no longer the monopoly of the U.S.”

The regime routinely threatens Guam, as it did after the United States flew two B-1B bombers over the Korean Peninsula on Tuesday local time.

Major media outlets and pundits have framed the threat as a response to Trump’s “fire and fury” comment while the statement itself points to recent military exercises including the testing of Minuteman-3 ICBM at its Vandenberg Air Force Base in California.

The statement said the Korean People’s Army (KPA) is examining an operational plan “for making an enveloping fire at the areas around Guam with medium-to-long-range strategic ballistic rocket Hwasong-12 in order to contain the U.S. major military bases on Guam including the Anderson Air Force Base.”

The KPA statement said bombers in Guam “get on the nerves of the DPRK and threaten and blackmail it through their frequent visits to the sky above South Korea.”

The awkwardly worded statement suggests the regime has a Hwasong-12 medium-to-long-range strategic ballistic rocket stationed “to send a serious warning signal to the U.S.”

Guam is a territory of the United States and its residents are U.S. citizens by birth. Thousands of American service members and their families also live there.

The island rests 6,000 miles from Los Angeles but just 2,000 miles from Pyongyang. Though the United States has bases in Japan and South Korea that are much closer to North Korea, launching an attack from either of these would require the permission of those governments and could bring those countries into the war.